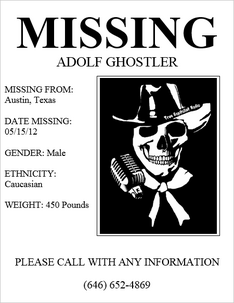 Ghost has gone periods of time without broadcasting but this article specifically discusses Ghost's absence between True Capitalist Radio in 2012 and the Return in 2016.

Ghost's Absence occurred in between Episodes 226 and 227, although there were a few Paltalk sessions just after the former, and the Message By Ghost and the Emergency Broadcast just before the latter. Ghost claims that during the time he was living lavish, as a result of his being a capitalist and making money, though that he'd run into problems. He claims that ice cream trucks began showing up outside his home, that he was forced to live in hotels, moving from location to location, though still living lavish, and that his health deteriorated during this time. He claims that there was much suspicious activity going on around him.

While Ghost has rarely specifically discussed what he did during the period of absence, it has often come up while discussing other matters. He is still living in Austin, and has almost completely pulled out of the markets. It is unknown whether or not Ghost had a dog prior to the absence and as a result quite possible that Templeton, Ghost's Wife's dog, was acquired during the time period. Ghost also stated that any Twitter activity that took place during his absence wasn't his own.

This is currently the longest hiatus recorded that Ghost has taken.

One of the suspected reasons behind Ghost's two day disappearance

Ghost disappeared for a short while in April 26th: without any update on his Twitter or Gab accounts, or his BlogTalkRadio account after Episode 496 leading to concerns that he might disappear for five years again. According to Inner Circle members, he hadn't been sighted since the morning after Episode 496. Many people suspected that he may have disappeared again due to the recent tweets from 8Equal trolling RaidenSnake that would lead to Raiden quitting Twitter again. Others claimed he either left to take care of his wife, Trolls claimed that Ghost probably is hunting squirrels due to the events of Mrs. Ghost's car accident. At worst, some have suspected that DHS has finally made their move against him. Many wondered if Ghost would come back for a Saturday show.

Suspicions finally cleared when Ghost tweeted out, stating that he wasn't dead and merely took a break to rest and relax.

Retrieved from "https://truecapitalist.miraheze.org/w/index.php?title=Ghost%27s_Absence&oldid=19591"
Categories:
Cookies help us deliver our services. By using our services, you agree to our use of cookies.