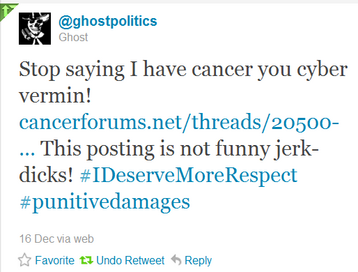 Around mid-December 2011, it was alleged that Ghost had been diagnosed with a form of prostate cancer. A troll took the idea and went on a cancer forum, posting as Ghost and adding in details to the story. After a large numbers of trolls tweeted this to Ghost, he responded on Twitter by declaring that he does not have cancer and threatening punitive damages against the person responsible.

The tweet has spawned several Radio Graffiti calls during the True Capitalist Radio broadcast talking about the cancer, to which Ghost swiftly denies everything.

Allegations about Ghost's cancer began once again in June 2016 after Ghost said that butter is good for ones health despite most research pointing to the contrary. Late in Episode 295 someone Tweeted Ghost with an article about how cancer is induced by high fat diet and anger problems. This drove already badly agitated Ghost to Rage Quit the show.

Retrieved from "https://truecapitalist.miraheze.org/w/index.php?title=Ghost%27s_Cancer&oldid=19146"
Categories:
Cookies help us deliver our services. By using our services, you agree to our use of cookies.