Ghost's December 2020 Absence is the second hiatus in the year. That came a month later after Ghost returned from a hiatus that started in October that ended in November. The hiatus started after the 209th episode of The Ghost Show on December 29, 2020 and ended on March 25, 2021. As of Febuary 8th, 2021, it is one of the longest hiatus Ghost has taken since The Break in 2017.

During Episode 209 of The Ghost Show, Ghost was disgusted over the majority of donations. Along with Joe Biden elected President of the United States. Ghost's disgust grew more when Ardhamon sent a video donation that ended with Ardhamon flashing his buttocks, causing Ghost to explode in rage and disgust. Ghost then exclaimed he would not do a show on New Year's Eve, ending the possibility of The Ghosties occurring in 2020. After Episode 209, Ghost did not air another episode of The Ghost Show or Saturday Night Troll Show. Putting both shows on hiatus.

Many viewers questioned where Ghost was. Many remembered Ghost's October hiatus from a few months back and assumed Ghost took another hiatus due to possibly Pinochet dying. However, unlike the previous hiatus. Ghost made no mention of why he took a hiatus on Ghost.report. With the January 6, 2021 Capitol Protest happening a week later along with Ghost hinting at encouraging protests (which caused DLive to later reprimand many users). Many viewers also assumed Ghost either died or was arrested during the protest or that Ghost is unable to broadcast on DLive in fear of being banned. The rumor of Ghost being at the protest was debunked after some Inner Circle members confirmed that Ghost was in the IC Discord room the day after the protest happened. It is currently unknown when Ghost will return from his hiatus. Or if Ghost has quit for good. 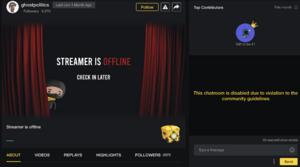 Ghost's DLive chatroom, with a notice stating it has been disabled.

On February 4, 2021, Ghost's DLive chatroom was banned by DLive for violating DLive's Terms of Service. Preventing many listeners who wanted to talk to Ghost, along with Ghost unable to receive any lemons that were donated to him. Many listeners wonder if Ghost will continue to find another platform to stream after his hiatus that stemmed from Biden becoming President. With many rebutting that previous platforms like YouTube would ban Ghost instantly. While adding that Ghost was still banned on Periscope since 2019. It was later discovered that Ghost's DLive chatroom was banned due to someone posting a fake dox in his chatroom and getting it reported. Resulting in the ban of his chatroom.

The Fall of the Thunderdome

During the hiatus, Ghost's "Thunderdome" discord server was shut down on February 16, 2021. Making it the second time Ghost's public discord was shut down.

On February 26, 2021, Ghost responded on his YouTube channel that he is returning in March. Along with a new Twitter handle @CapitalistGhost. Ghost also stated on Ghost.Report [1] debunking any rumors he was at the January 6, 2021 Capitol Hill Protest. While also condemning the protest and had to hide due to the aftermath of the protest. Many were in doubt when Ghost would come back in March, until Ghost announced on Ghost.report. That he will return [2] on March 25, 2021. While also announcing that if DLive bans him, Ghost will go to other platforms to stream that he prepared in case he is banned from DLive.

The End of the Hiatus

With Ghost keeping his promise, Ghost returned from his hiatus. With the airing of the 210th episode of The Ghost Show, ending the hiatus.

Retrieved from "https://truecapitalist.miraheze.org/w/index.php?title=Ghost%27s_December_2020_Absence&oldid=19686"
Category:
Cookies help us deliver our services. By using our services, you agree to our use of cookies.