“It was like Lord of the Flies. The Chatroom took a life of its own!” 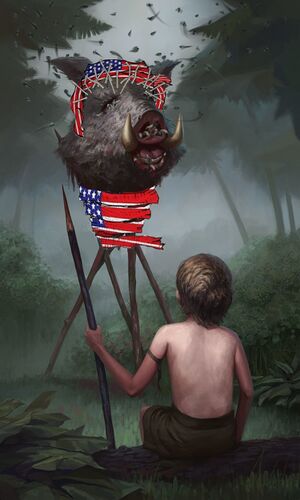 Ghost's Discord was the official TCR Chatroom started by Ghost in February 2018. After many years of not having a chatroom at all, or only speaking with the Inner Circle on occasional Paltalk chats and the Inner Circle Discord, Ghost eventually decided on creating his own chatroom.

The chatroom was semi-public, in that anyone can join, however it required a premium subscription to Ghost on Gab.ai for $5 a month. This had caused some controversy among the community, as Ghost previously never charged for his chatrooms (BTR Chat, Paltalk). However, supporters of this chat have defended it based on the quality and high activity of the chatroom.

There were also some concerns that Ghost would censor the chat as he had with the Inner Circle, removing trolls and undesirable elements from the chatroom. However, one of Ghost's first statements about the chats were that the rules were merely "No Illegal Content and No Doxing". In the case of spam, or people acting up, Ghost implemented a Woodshed to lock away said undesirable people, but only temporarily.

The return of a chatroom meant the return of Chatroom Shoutouts as well, which led to it being a regular segment again on the show, with Ghost devoting equal time to Chat shoutouts as Gab shoutouts. The chatroom would also play a role in the events of the Fourth TCR Cold War. 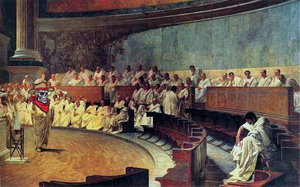 Clips from the chat were played by Twilie Atkins and Liquid Schwartz during Radio Graffiti on Episode 560, leading to Ghost calling them out.

On Episode 581 and Episode 582, Ghost had gone into the voice chatroom within the Discord as a way to take audience interaction on a subject matter, replacing call-ins.

Since Gab's closure over the Tree of Life Synagogue shooting, the fate of the chatroom was left unknown, however Ghost suggested needing to do everything in Cryptocurrency.

However, the following show, Episode 561, said pedophile would call in to the show during the free format segment and attempt to defend his positions to Ghost again, making such strange statements as saying the "law is unfair". He would eventually be cut off by his father (or some elder figure) telling him to hang up in the background. Ghost and many trolls would be disgusted over this incident, with some questioning why Ghost let him in the chat in the first place, to which Ghost would respond that he had no idea. Ghost would explain the story, as well as a detail that he enjoyed "the squirts", which some people would attempt to troll Ghost over. This incident has earned the individual the nickname of "The Squirts Guy" amongst the community.

Interestingly, The Squirts Guy would make a return in 2020 after Ghost created his second chatroom. Although he would join under a different alias, he would later be discovered and leave the chatroom once again, repeating much of the same history two years prior. 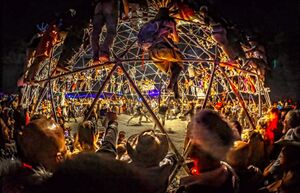 Over time, especially starting in May 2017, drama from within the chatroom reached boiling point with many members of the chat being tired of seeing other people indulging in cartoon fetishes, often pedophiliac in nature. As a result, members of the chat would take Ghost's views on autists and manchildren to heart and became fed up with the amount of people joining who were bronies, anime watchers, or people who had sexual interests in cartoons, even if it was for the smallest of reasons, such as an account on a suspicious site.

On the night of May 14th, following a particular incident, a 'mob rules' system was initiated which eventually led to the idea of the "Tard Thunderdomes", a regular event in the chat where members would attempt to confront people who had potential manchild behavior exposed, with most incidents ending in the accused leaving the chatroom. The Thunderdomes were means of interrogating members by going through their public social media accounts and sharing them with the rest of the chat and later humiliating and ridiculing said victims to the point where they would leave the chatroom for good. It is believed that only a single member of the discord, SauciBoi, managed to survive the "Tard Thunderdome", after several parody videos were discovered on a channel sharing the same username and profile picture.

During Capitalist Episode 566, one caller would call out a member of the chatroom, while another would state they had sick fetishes that were being unearthed in the chatroom, much to Ghost's disgust. Ghost's voice went out on Capitalist Episode 567 following an incident within the TCR chatroom the previous evening, with Ghost stating that the manchildren behavior went "to the top". It's unknown who or what he was referring to. 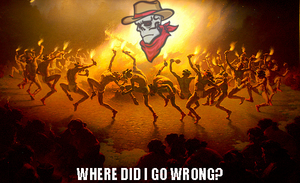 Around late November 2018, After the climax of the Fourth TCR Cold War, Ghost would completely close down the discord server, possibly out of frustration towards those he deemed autistic. Many believed this was the final nail in the coffin for Ghost and that he would no longer return to the internet. However to everyone's surprise, he would return on New Year's Eve 2018 in his new incarnation of his show called The Ghost Show on YouTube and VaughnLive.

Throughout the year of 2019, listeners would often donate to Ghost, asking whether he would bring back the discord chatroom. Ghost stated that although he would open up another server again, he is hesitant on doing so, fearing the Thunderdomes would return in full force. Ghost also claimed how the previous chatroom was like Lord of the Flies and took a life of its own due to the amount of Thunderdomes that went occurred and the amount of people that went down as a result, citing partial blame to InsaneEnergy and other prominent members for spearheading them.

Several people have suggested to increase the admission fee to the chatroom to avoid "strange people" from joining, while Ghost countered this idea due to him believing strange people would join regardless.

Ghost finally opened a new Discord chatroom in February 2020, calling it "The Thunderdome" in reference to previous drama.

Instead of $5 a month, chatroom access now costs a one-time payment of $55.66 through StreamElements. Ghost also gave free access to active members of the Inner Circle and his top 25 donators.

"The Thunderdome" made in February 2020 was taken down on February 16th, 2021. The specific reason for this is unknown, but it has been speculated that the bronies had removed many accounts within the discord and got their accounts including the discord server to be taken down.

Retrieved from "https://truecapitalist.miraheze.org/w/index.php?title=Ghost%27s_Discord&oldid=20669"
Categories:
Cookies help us deliver our services. By using our services, you agree to our use of cookies.