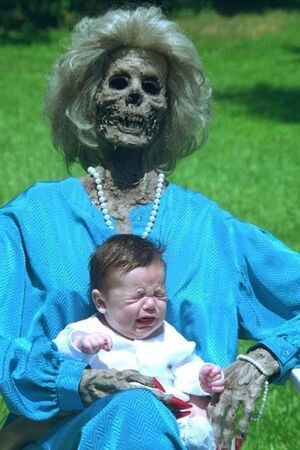 Pictured: Ghost's Grandmother holding a frightened Ghost as an infant

As the name implies, she is Ghost's late grandmother, or "Granny" as he commonly calls her.

When any reference is made to Ghost's grandmother during a Radio Graffiti call, the Chatroom, or during Twitter and/or Gab shoutouts, it will usually encourage an aggravated response in which Ghost will yell, "Don't talk about my granny, asshole! She was a pious woman!" He sometimes continues with a long rant describing how nice his grandmother was: Ghost explained how she would cook holiday meals, give leftover food to the neighbors, and never curse. This in turn caused Text Chat Warriors to spam the word "BORING" in the chatroom, which caused Ghost to implement Chatroom Martial Law, and the vicious cycle of ranting and raving would have repeated itself.

Ghost refers to his grandfather, his granny's husband, as an "old son of a bitch." It has also been stated that Ghost's granny is his mother's mother.

Although she wasn't trolled as much when Ghost returned in 2016 compared to his wife, there were still splices and Twitter/Gab names making fun of her. One Twitter name, for example, "Trans Ghost Granny" from Episode 299 sent him in a rage.

Recently, the topic of Ghost's granny was revived as a troll character by J-Man on The Ghost Show. This character has been successful in causing massive rage. In some of these calls the Granny was accompanied by a caretaker named Tyrone who Ghost believed was the real African Booty Scratcher.

Retrieved from "https://truecapitalist.miraheze.org/w/index.php?title=Ghost%27s_Grandmother&oldid=16461"
Categories:
Cookies help us deliver our services. By using our services, you agree to our use of cookies.