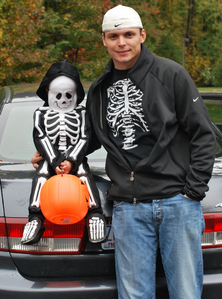 (From left to right) Ghost and Ghost's son

As the name suggests, he is the son of Ghost, the host of the True Capitalist Radio broadcast.

Ghost's son has been a trolling weak-point for Ghost, causing many cans.wav and memorable quotes including the first "Don't talk about my family, asshole!"

There are many splices of Ghost's son in the background, as a young boy rather than the age Ghost reports him to be at (the clips are taken from different callers) The splices usually consist of Ghost physically or sexually abusing his son in some way.

Ghost's son seems to have been an adolescent during the 90s, when he and Ghost used to frequent arcades to play popular fighting games of the time. In Capitalist Episode 250, Ghost named Street Fighter and Soul Edge as two specific games they played together.

During the original run of True Capitalist Radio, Ghost frequently told a story about his son going through a gangsta rap phase during his teenage years. This was during the 1990s. His son spent large amounts of time listening to gangsta rap like Snoop Dog and Dr. Dre. He walked around with his pants sagged and tried to act like a "Brutha." He, apparently, made some comments that suggest he thought Ghettos were a fun or cool place to be. Ghost did not approve of this. Ghost drove his son out to the hood, found the dirtiest, nastiest part of town and dropped his son off, telling him, 'if you want to be a gansta, now you can.' He drove off. A few minutes later, Ghost had circled the block and picked his son back up. His son was crying. After this incident, the gangsta rap phase was over. Ghost revealed in the first Inner Circle chat that a mere two weeks after this incident, he started listening to grunge.

Ghost's son may be married, as Ghost has mentioned having a granddaughter. Ghost has also mentioned that he is very wealthy and has managed to attain an even greater fortune than his father.

The Hunt for Ghost's Son Incident 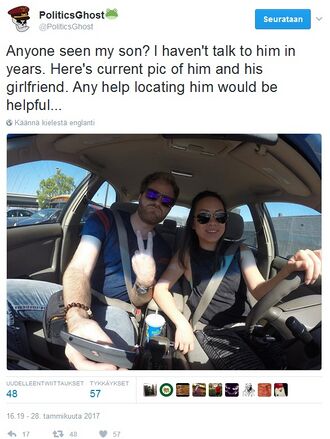 The strange Tweet by Ghost where he claims man in the picture is his son.

A bizarre incident began on January 28, 2017, when Ghost posted a picture on Twitter of an unnamed man who he claimed was his son, in a car with an Asian woman presumed to be his girlfriend. He asked his followers to find out more about the man's whereabouts and current circumstances, and shortly afterward posted another picture of the man standing alone in a suit. According to Inner Circle members, Ghost briefed them on the situation in a private chat, but no details from this conversation have been leaked. 4chan users supposedly found the man's Facebook page (now deleted), as well a Twitter account.

Ghost thanked his followers for helping to track down the man and said that he would try to pay his alleged son a visit over the weekend. At the same time, he received a barrage of edited images (similar to those of his and the Engineer's autographs) of the photos on billboards, legal documents, and in various other places. A few hours later, Ghost and several major listeners tweeted that the hunt was over.

Ghost's last tweets on the search said that "[his] son's sexual lifestyle is more important to him than his Father" and expressed disappointment at trolls mocking him over this allegation. It is unclear whether this was meant to imply that the man is a fruitbowl, had to do with his Asian girlfriend, or something else entirely.

On his own Twitter, initially claimed he could not meet Ghost that weekend as he would be out of town, without denying being Ghost's son, but later told "the new people suddenly interested in [his] life" that they had mistaken his identity. Some of Ghost's fans then suggested that Ghost was trying to get the man's dox because he suspected him to be some internet foe. Redford said that he had nothing to hide from the Capitalist Army because he wasn't CelticIbanCrew (however, CelticIbanCrew's twitter was deleted during this incident, and he had posted angry tweets towards Ghost), and on January 29th he explicitly denied being Ghost's son as well. His true identity and connection to Ghost remain unknown.

Retrieved from "https://truecapitalist.miraheze.org/w/index.php?title=Ghost%27s_Son&oldid=19081"
Categories:
Cookies help us deliver our services. By using our services, you agree to our use of cookies.