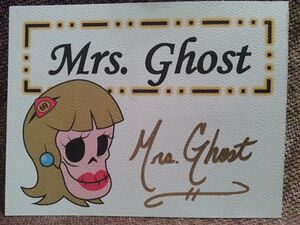 Ghost's wife as seen in her autograph

Ghost claims to have a faithful wife of 20+ years, referred to as Mrs. Ghost. She is the mother of Ghost's son.

Ghost explained that during the Christmas season, his wife cleaned up the whole house and put decorations everywhere, making it look like the cover of a Pottery Barn magazine.

Ghost's wife, for the longest time, had not been the target of many troll calls; both his son and his grandmother have been used far more. Since the Return, though, this has begun to change. After the first full episode in which her dog Templeton interrupted the broadcast by chewing on Ghost's computer or mic cables, she has been more frequently referenced in relation to her dog. There have been multiple splices of Mrs. Ghost in different situations since the Return that have gotten him very annoyed, such as her dying, having sex with different people, such as Tyrone, being insulted, and so forth, with a splice of her banging the Engineer that was played on Episode 338 having caused Ghost to have a massive tantrum. Ghost's wife played a central role during the Double Dipping Incident in 2016.

She apparently revealed her identity during a Paltalk session with the Capitalist Army on February 11th, 2012, when Ghost was at his home. This remains unverified, as there are no recordings of that session left on YouTube. This happened again in the first Inner Circle meeting on September 3rd, 2016, and thanks to the chat being public accidentally, there was a recording. She can be heard in the recording quietly talking to Ghost, laughing towards the end, etc. However, she was asleep from the middle of the session until the final few minutes.

Ghost laughed off accusations that she was a "Latina Goddess", accusing the chat of being racist and making assumptions because he eats "TexMex" and goes to Taco Bars. On Episode 398, Ghost officially put his wife's autographs for sale. Ghost had did a bet with the Bronies, if her autographs outsell his, Ghost will sell Pony merchandise. However, Ghost was irate when the Bronies were buying her autographs. Ghost said that he would take breaks if he was outsold by his wife.

Ghost canceled his broadcast on April 25th, 2017 after his wife had reportedly been in a car accident. He later tweeted that she was okay, and promises to share more info on the next show. Ghost explained that Mrs. Ghost had been driving when a squirrel stood in the road in front of her. She quickly tried to swerve out of the way, however crashed into a nearby guard rail. She ended up unharmed, though the damages to the car ended up costing Ghost $5000, causing him much anger directed at the squirrel, with him wanting to skin the squirrel and make a hat out of it. The incident, of course, became a way for trolls to anger Ghost.

Another wife-related incident occurred the day before Episode 498. On that episode, Ghost explained that he took the day off yesterday because his wife was suspicious of The Cupcake Lady after she gave Ghost Cinco De Mayo-themed cupcakes. This led to an argument between the missus and the Cupcake Broad, and Ghost had to cancel the broadcast for that day to sort things out. After Ghost brought it up on the broadcast, this led to cupcake-related shoutout names and the return of the squirrel names.

Retrieved from "https://truecapitalist.miraheze.org/w/index.php?title=Ghost%27s_Wife&oldid=13518"
Category:
Cookies help us deliver our services. By using our services, you agree to our use of cookies.