Description: Ghost watches and commentates over an old comdey[sic] that it[sic] now in the public domain. Please APPRECIATE! Cheers! 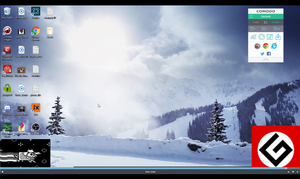 The only remaining screenshot of the stream, where Ghost showed his desktop by accident for a moment.

This would be Ghost's second stream on Gab, and it would last for about 40 minutes. It started with little warning, and Ghost quickly moved in to playing an episode of "Three Stooges" that had entered the public domain, giving running commentary over it. Ghost would then toke up on stream, and start playing another public domain film, Reefer Madness, before abruptly ending the stream thinking it had gone offline. Unlike the first stream, Ghost would leave the VoD up afterwards. Ghost would get $17 in "appreciations", which is Gab's way of donating to streamers and video creators, as well as a subscription to the chatroom in mid-stream.

Ghost also noted that he watched The Three Stooges when he “was a young kid”. This could hint at Ghost’s year of birth, along with his claims of allegedly serving in the Vietnam War. More over, Ghost mentioned how "Reefer Madness" (which was first released in 1936 as "Tell Your Children", same year as "Disorder in the Court") scared him out of smoking weed in his childhood. If Ghost's recollections are true, then there's a chance that he grew up during The Great Depression (which took place between 1929 and 1939). Moreover, this could imply that Ghost is in his 80s. Though considering how most of the earlier information he has given about himself suggests that he was born some time after WWII, it's more likely that he saw Reefer Madness during its roadshow screenings that occurred throughout the '50s, as the title "Reefer Madness" was only used during that time, the film's release in New England in '40s and its re-relase in the '70s.

This was the only livestream still archived on Ghost's "Videos" tab on his Gab, until it was removed at an unknown time after the stream happened.

Retrieved from "https://truecapitalist.miraheze.org/w/index.php?title=Ghost_Watches_Three_Stooges_%22Disorder_in_the_Court%22&oldid=14114"
Categories:
Cookies help us deliver our services. By using our services, you agree to our use of cookies.