“Ghost, a happy wife is a happy life, that's why we let our wives push us around like your granny pushes you around in your wheelchair”

“I'M NOT A GODDAMN CRIPPLE! Jesus Christ, man. I'M NOT A DAMN CRIPPLE AND THAT WAS- THAT WAS RIDICULOUS! THAT WAS SCREWED UP, MAN! True Handicapped Radio you sons of bitches.” 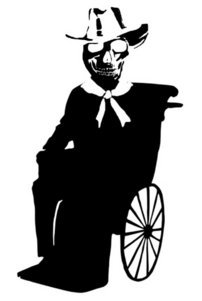 Crippled Ghost is one of the longest-running, frequently-occurring running troll gags on TCR and TGS. After doing a voice comparison during one of his True Capitalist Radio broadcasts during which he facetiously stated that he was in a wheelchair, Ghost was trolled by by various Twitter Names and Radio Graffiti callers claiming that he was crippled. Ghost has since adamantly denied being a cripple, even going as far as to tap dance ('doing folklórico') during his broadcast to prove the trolls wrong. Referring to Ghost as a cripple and/or wheelchair user, or even referencing wheelchairs, has become a reliable way of enraging him despite its frequent repetition, easily driving him to cans.wav.

Around Capitalist Episode 234, Ghost used the phrase "I could be a cripple in a wheelchair" describing a hypothetical situation. The following episode, Twitter Shoutouts and Radio Graffiti were plagued with jokes about Ghost being in a wheelchair. 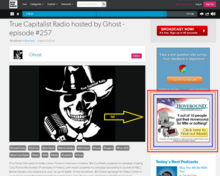 The Hover rounds advertisement.
In late May 2016, trolls began combining cripple/wheelchair jokes with references to the Vietnam War, often implying that Ghost was paralyzed or lost his legs while fighting there. Splices and Twitter names on this subject, such as "Left Legs In Rice Paddies", are particularly potent rage fodder for Ghost. By late 2016-early 2017, people stopped trolling Ghost on this matter, only infrequently occurring. After the 2017 Break, trolls later began calling him bald and insinuating that he wears dentures (see below).

Due to the higher-fidelity audio format on YouTube, Ghost's office chair can be heard frequently creaking during a broadcast. This occasionally prompts trolls to tell Ghost to "oil his wheelchair", or suggest that his wheelchair is buckling from the weight. 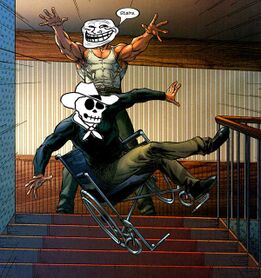 A Troll Terrorist throwing Ghost down the stairs.
Retrieved from "https://truecapitalist.miraheze.org/w/index.php?title=Crippled_Ghost&oldid=15947"
Categories:
Cookies help us deliver our services. By using our services, you agree to our use of cookies.