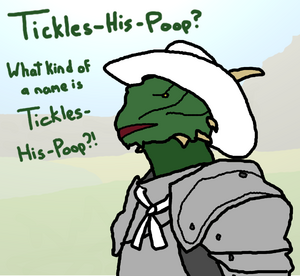 Fan-art of Ghost in his Argonian Form

The idea of major world leaders and powers being shape-shifting lizards is a well-known conspiracy theory, with supporters including Alex Jones and David Icke. Commonly accusations are pointed at US Presidents as well as British and global monarchies. Interestingly, and somewhat appropriately, some people believe that the 'lizard-people' theory is a cover for a similar theory about Jews.

Many fans believe Ghost of True Capitalist Radio is some sort of shape-shifter, lizard, reptilian, or Argonian (a race of anthropomorphic lizards from the Elder Scrolls series of video games). The label has been a common insult for a while, and callers have tried to get Ghost to confess to his apparent reptilian side. Ghost usually retorts by calling them "Alex Jones worshippers", who think he's a "Draconian lizard shapeshifter from the planet Drago". Evidence of his transformations include his strange noises when apparently throwing up, and the equally unusual sounds from the woodchipper segment.

Retrieved from "https://truecapitalist.miraheze.org/w/index.php?title=Ghost_the_Lizard&oldid=15190"
Category:
Cookies help us deliver our services. By using our services, you agree to our use of cookies.