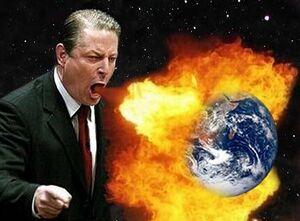 What Ghost sees it as.

Global warming (or, more scientifically accurately, climate change) is a term for the observed century-scale rise in the average temperature of the Earth's climate and the effects of said change.

While the general scientific consensus is that the planet's average temperature is increasing, and it is extremely likely (95% probability or higher) that human actions (such as burning fossil fuels) are contributing to it, a number of people believe climate change to either not exist or be greatly exaggerated, one of whom is Ghost, who not only believes that climate change does not exist, but believes that world leader's attempts to reverse this trend are part of a global conspiracy whose end goal is to indoctrinate the world into accepting worldwide communism (as expressed in this post on Yahoo answers).

It became a topic again in the Return when Ghost criticized Bill Nye for saying that "people should be jailed for denying climate change." This ended up spawning a short-lived series of trolling of Twitter names, such as "Ghost Nye" and a few remixes.

Retrieved from "https://truecapitalist.miraheze.org/w/index.php?title=Global_Warming&oldid=8639"
Categories:
Cookies help us deliver our services. By using our services, you agree to our use of cookies.