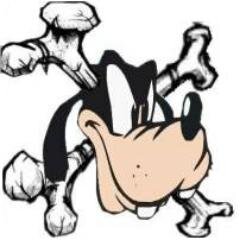 Goofy Bone (real name Mike Monza) was a long-time serious caller, and ex-regular (Ghost no longer takes his calls according to Goofy) on the True Capitalist Radio broadcast. He claims that he was inspired by Ghost's broadcasts to identify himself as a capitalist. Due to his shameless brown-nosing on the show, constant countering of the trolls and overall idiotic behavior on the show, he is considered to be the first Short Bus Member in True Capitalist Radio. He was also a BlogTalkRadio host from 2009 to 2013. He returned to BlogTalkRadio in April 2015 after being 404'd for 2 years & broadcasted irregularly until August 18th, 2017.

Goofy Bone is a Mexican from San Jose, California, who has made several attempts to enter the music industry. He uploaded his, at first, live performances of his earlier songs and eventually homemade rap music videos to his YouTube channel and has released at least four albums. He has released at least 12 music videos. He is often strongly critical of Obama and has on occasion indulged into conspiracy theories related to his presidency.

Because of his apparent arrogance and stupidity, he was made TCR's punching bag, often jokingly referred to with derogatory names like Goofy_Brony, Boofy_Gone, and most infamously, Goofy_Boner. He often claims superiority to all other callers on the show and commonly uses racial slurs and a high amount of curse words to defend himself if anyone questions him live on air. Even when he is clearly losing control of his broadcast, Goofy still keeps his tough-guy image together. He often tweets about sleeping with multiple different women, yet he used a soundboard of the Team Fortress 2 Administrator on his show, and often sweet talked to it.

Ghost himself eventually got sick of him, and stopped taking his calls in September 2011 and beyond, following a falling out between the two when Ghost heard Goofy was copying his show from a caller during a True Capitalist Radio broadcast. Goofy reciprocated by declaring he hated Ghost the entire time and then cut off all references of him from 186.DUCE for a while (Yet his five minute long audio samples often included three or more clips of Ghost, and his Twitter Shoutout segment began with a ripped clip of Ghost starting his own). Curiously, despite no longer taking his calls, Ghost still played Goofy's song "Just Give Her a Bone" during some breaks until some time in 2012.

Goofy Bone has had a long standing hatred for fellow BlogTalkRadio host Debi Daly and was a part of the 'allied' factions in the Second Troll War of BTR in 2010 to dox her. The two often go on extended tirades against each other, sometimes even rivaling the enemyship he holds with Tzeki.

Goofy Bone is, like most callers in his type, generally hated or otherwise disliked by both trolls and regular callers on Ghost's show. Over the summer of 2011, as more and more trolls joined the Capitalist broadcast, Goofy became more and more hated. Radio Graffiti calls often gave shoutouts ending in "...and fuck Goofy Bone".

During the summer of 2011 Goofy Bone was arrested and imprisoned for, according to many of Ghost's callers molesting an underage girl. There have been several splices and audio-clips of this.

Goofy Bone has lost his BlogTalkRadio account multiple times, due to his inflammatory views, and consistent wars with other hosts, most notably Debi Daly. He generally reclaims it after a week and continues whatever activities he was doing beforehand.

In mid-July 2013, Goofy Bone was 404'd from BlogTalkRadio after broadcasting a show about the Trayvon Martin Case. While it is unclear how it happened, Goofy Bone & most of his followers are pointing fingers at Debi Daly for reporting his account. Goofy has not reclaimed the account, and has not attempted to restart his show since the incident occurred until April 2015. During the course of 2 years, he instead opted to voice his displeasure for his old nemesis through other hosts friendly with him, by them giving him airtime on their own shows.

Ever since the Return, Goofy Bone has maintained his animosity towards Ghost. He seems to harbor a one-sided hatred towards Ghost on Twitter, arguing with him just about every chance he gets. It's unclear if Ghost still dislikes him after Goofy was accused of plagiarizing his show in September 2011.

Goofy Bone and Tzeki, both serious and regular callers, quickly became enemies on the True Capitalist Radio broadcast. Being friends with both of them, Ghost remains neutral during their arguments, though he often starts them and seems to side with Goofy as he tends to laugh at his insults while staying silent at Tzeki's. When either of them called, Ghost would put the other on the line at the same time, which would lead to the two arguing.

Because of how Goofy acted during the battle, anti-Goofy Bone Radio Graffiti shoutouts and eventually Goofy Bone's anti-Tzeki shoutouts started to appear. Tzeki usually refers to Goofy Bone as using welfare, which upsets him because he claims to be a capitalist.

The fight calls stopped happening during the summer of 2011, mostly because Ghost (apparently) stopped taking Goofy's calls after Goofy started 'ripping him off' and then Tzeki stopped calling in as well. However, there was a small reunion during Ghost's 4th year Anniversary where Ghost allowed both callers on air at the same time to battle. After the battle was over, Goofy was pushed to the side once again. 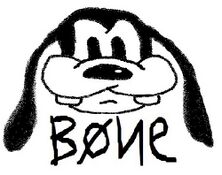 186.DUCE was the Blog Talk Radio show hosted by Goofy Bone. He started broadcasting in 2009.

For a short time, during fall of 2011, his broadcast became one of the alternates to Ghost's True Capitalist Radio during Ghost's many days off. DarkRazorZ uploaded a series of videos pf trolling attempts, featuring Ghetto Capitalist and Tzeki, only to give up due to Goofy's lack of an interesting personality and reactions. Goofy Bone often gave out the numbers of callers and was known for frequent harsh language. He was frequently banned from Blog Talk Radio.

One notable accomplishment of his broadcast was successfully calling the Mean Eyed Cat Bar on Sixth Street (One of Ghost's favorite spots) during a Baller Friday in October 2011, when what appeared to be Ghost's voice was heard in the background, who (apparently) tried to get outside to avoid picking up the phone. Sometime later, Ghost expressed annoyance at this interruption of his nightly activities, and asked people to stop calling 6th Street asking for him. Assuming all attempted doxes thus far have been wrong, this is probably the closest anyone from the show has gotten to contacting Ghost in real life.

Goofy Bone was accused of plagiarizing of Ghost's show, such as having Radio Graffiti, his own Engineer (which he at first imitated then changed to Engineer sound clips and then to Chewbacca) and giving out the numbers of callers. He also has "Bean and Cheese Graffiti" (named as such after Ghost claimed Goofy's version to being a 'bean and cheese' version of his) at the end of his broadcast along with direct audio clips from Ghost's show. This has caused Ghost to lose a lot of respect for his former friend. Goofy Bone then stopped calling Ghost, and claimed he was a sellout and a rip-off of him.

Goofy's show continued on after TCR went defunct although with lackluster support, mostly centering around a small ring of callers and friends of his. Despite Goofy's behavior and view they sided with him when trolls ended up in the mix of things. Many TCR trolls arrived at the show from time to time, intending to flame him, yet only come-and-go because of Goofy's boredom. The show was mostly Goofy praising himself on becoming a 'late night' sensation on BTR, playing his own music, taking calls from the same few people, and bashing Vince in the Bay.

Goofy Bone's BTR page was 404'd on July 18th, 2013 following numerous complaints from other hosts and previous suspensions put on his account. He has not done a show on BlogTalkRadio from July 2013 until April 2015 in which he opened a new BlogTalkRadio account & began simulcasting on Spreaker in similar ways that Debi Daly has done in the past. Prior to simulcasting on BTR in April 2015, he only broadcasted 186.DUCE on his Spreaker account starting around October 2013. He has not been broadcasting since August 18th, 2017.

Trolls on 186pointDUCE were not unlike the trolls featured on True Capitalist Radio, and, like TCR, often caused Goofy to 'rage quit'.

Goofy was known to save the aforementioned trolls above tactics as a means to go to break (regardless if they are in his waiting queue).

Callers would call in repeatedly playing songs on the recorder (usually "Happy Birthday"), which often pisses off Goofy and causes him to play music instead of taking calls. Xarahox was the one that started this, on either the June 22 or June 25, 2012 episode of 186.DUCE, where he called in with numerous Skype names playing recorder music, and in the next few shows, nearly every caller played recorder music.

Making fun of certain sports teams, praising Obama, and declaring him a rip-off of Ghost were other ways to irritate him.

Song that usually makes Goofy halt/end the show. A couple trolls have also played this song on TCR.

Goofy showing off his "talent".

Retrieved from "https://truecapitalist.miraheze.org/w/index.php?title=Goofy_Bone&oldid=18601"
Categories:
Cookies help us deliver our services. By using our services, you agree to our use of cookies.