Half a Tard Ghost 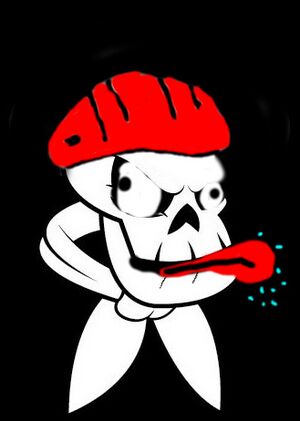 Half a Tard Ghost is a trolling tactic that began around May 2016 in which quotes from Ghost are repeated in a similar fashion to Mid-Show Splices, but are instead slowed down significantly in an audio editing program. This creates an effect that makes Ghost's voice slur and sound like he is drunk or inarticulate. He often responds, 'stop trying to make me sound like 'half a tard'!', hence where the troll got its name.

The quotes that are used have often been related to the 2016 Texas floods, but the troll has begun to expand its horizons with this tactic, utilizing audio clips of Ghost already imitating a mentally incapacitated person (including his 'Billy' impression from the 2011 Christmas Eve episode), and then slowing down those clips. Ghost has termed this 'going full retard' and has asked (to no avail) for the troll to stop doing it. Even Donald Trump had quotes he said slowed down to make him sound like half a tard.

This troll quickly led to people modifying Ghost's voice in many other ways. He's been edited to sound like a drunk, the Lord of Darkness and a Smurf. Ghost's rage has increased at each new type of edit, with these ones usually receiving cans.wav, especially Cartoon Ghost.

After a few years later, Half a Tard Ghost returned on the 136th episode of The Ghost Show. With Pylons playing a splice of Ghost rambling about peaches and Mr. Pibb.

Retrieved from "https://truecapitalist.miraheze.org/w/index.php?title=Half_a_Tard_Ghost&oldid=18508"
Categories:
Cookies help us deliver our services. By using our services, you agree to our use of cookies.