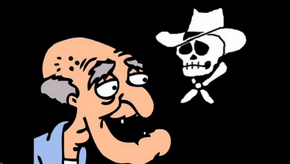 Herbert the Pervert was a troll caller on True Capitalist Radio. Using an impression of a character from the popular animated television show Family Guy, he called up Ghost's show, usually using a character from Family Guy as a skype name, and pretend to be the pedophile. Herbert often made comments asking about Ghost's son, which caused Ghost to rage over people insulting his family. Herbert did not come back when Ghost returned in 2016.

Along with terms like "Woody Allen butt-lovin' pedophile", Ghost referred to Herbert as an unoriginal prick. With the other trolls, however, his popularity rested in the fact that he was not a soundboard, but someone with a very good impression of the character.

During Capitalist Episode 487, a call seeming to come from Herbert himself was heard, but it is unclear if it was the real Herbert.

On the topic of Seth MacFarlane, callers began spamming Ghost with The Cleveland Show theme in December 2016.

Retrieved from "https://truecapitalist.miraheze.org/w/index.php?title=Herbert_the_Pervert&oldid=13910"
Categories:
Cookies help us deliver our services. By using our services, you agree to our use of cookies.