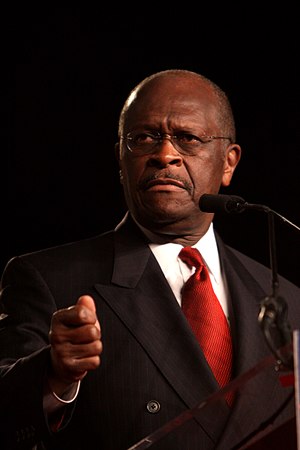 Herman Cain (1945-2020) was a Republican Party Presidential Candidate for the 2012 United States Presidential Election. After his statements about the Occupy Wall-Street protests, he gained the support of Ghost, the host of the True Capitalist Radio broadcast. Ghost affectionately nicknamed him "My man, Herman 'Sugar' Cain", (and as this is the internet, it led to some rather explicit artwork).

Ghost's initial endorsement of Cain was not without trouble. Following his endorsement of "his man", Ghost asked the Engineer to put on some relevant music. Unfortunately for Ghost, the Engineer selected the theme song from a 1975 "blaxploitation" film, Boss Nigger, presumably due to the frequent use of the N-word in the title and the song's lyrics.

The beginning of the song was an instrumental, which Ghost remarked was "kind of catchy", while asking what it was. The first lyrics of the song described a bold "black man in a white man's town" Ghost began to worry, asking "What is this crap, Engineer?". In the song's chorus, the title, with the offending word in it, was finally referenced; upon hearing it, Ghost panicked. He shouted angrily at the Engineer, while the music continued in the background for several seconds.

After stopping the piece, Ghost went ballistic about the potentially racist lyrics of the song, shouting to the Engineer, "You made me look like a jackoff!", and questioning whether the Engineer was "gonna wear a freakin' bedsheet on [his] head". After calming down, Ghost apologized for the Engineer's choice and stated that he had hoped the Engineer would put on some "decent music".

The incident is considered the Engineer's greatest triumph, and led him to be hailed as a "master troll". The piece became the highlight of future "takeovers" by the Engineer, and several remixes have been made of the song.

Dropping Out of the Running

Starting in October 2011 several news articles were published alleging Herman Cain to have sexually harassed women. This led to his dropping out of the running. Ghost personally claimed this was Cain's "modern-day media lynching". Ghost claims that the liberal media "lynched" him so that Barack Obama could use the Race-Card again in the 2012 election and the GOP betrayed him because he wasn't already in office; he wasn't a bureaucrat like them. This has led Ghost to form the idea that all currently-elected politicians are "in it for the money" and are willing to "do anything to stay in office".

The whole topic itself has since become a weak spot for Ghost. He usually responds to Herman Cain jokes by shouting "Leave the man alone!"

Starting in January 2012 Herman Cain began officially endorsing Newt Gingrich. After defending Herman Cain against the trolls for months Ghost felt betrayed with this news. Ghost has said "Herman Cain and I... We're not on speaking terms anymore." Despite this, Ghost still defends Herman Cain from any vulgar Twitter Names and calls (such as the 'Herman Cain should sit in the back of the train where he belongs, choo-choo' guy), yet no longer backs him up politically.

Ghost begrudgingly endorsed Mitt Romney instead. On the final weeks of the election on someone pretending to be Ghost on Twitter, they cited he was the 'most capitalist' of the candidates next to Cain. Ghost had not followed up on the GOP ever since Obama won a second term, until endorsing Donald Trump in 2016 four years later.

Ghost's passionate endorsement of Herman Cain during the 2012 election can be seen as a part of a wider trend wherein Ghost, due to his unconventional political ideologies, tends to gravitate towards non-mainstream candidates. This was first seen in the 2008 election, in which Ghost was critical of mainstream Republican candidate John "Turncoat" McCain, as seen in 2008 episodes of True Conservative Radio. Herman Cain, known for bizarre promotional stunts from his past and eccentric actions such as quoting the Pokemon movie in his speech upon dropping out of the race, was something of an object of mockery during the 2012 primaries, and Cain's unpopularity with mainstream Republicans likely made him more appealing to Ghost.

Moreover, Ghost's political self-identification as a capitalist (rather than a Republican or conservative) and belief that a capitalist would be best suited to lead America was reflected in the 2012 election via his endorsement of Cain (an ex-pizza mogul) and, later, his begrudging endorsement of Mitt Romney (known for his business enterprises in consulting). Ghost's dream of a capitalist ruling America would finally come true in 2017 in the form of Donald Trump, a longtime political ally of Herman Cain's whose candidacy as an embattled, anti-bureaucrat candidate going against the grain of the Republican Party bears a number of parallels and similarities with Cain's.

Ghost's advocacy for Donald Trump in 2016 which eventually led to Trump's victory in the Meme Wars can be seen as the culmination of all the hopes and dreams Ghost once had for Herman "Sugar" Cain.

Ghost was hoping that Cain would become Donald Trump's running mate in the 2016 elections, but the trump ultimately picked Mike Pence as his vice presidential candidate.

In Capitalist Episode 505, Ghost compared the smear campaign launched by the press against anti-establishment GOP candidate Roy Moore, consisting of (in Ghost's opinion) false sexual assault allegations, to the similar allegations that had been raised against Herman Cain six years prior. Ghost brought back the infamous appellation, "my man, Herman 'Sugar' Cain", for the occasion.

When a splice making fun of the allegations against Cain was played on the following episode, Ghost came to the former candidate's defense once again, reiterating his belief that Cain "was set up."

On July 30th 2020 Herman Cain died of COVID-19, or more commonly known as Coronavirus - a virus Ghost and Herman themselves downplayed. His death led to hundreds of trolling attempts and donations, much to the chagrin of Ghost.

Ghost's coverage of Herman Cain's campaign spawned a whole world of Herman Cain-themed Twitter and Chatroom names. Similar to Jerry Sandusky names, the names have become a running gag in the broadcast, along with PoopTickler and Burning Texas jokes.

Retrieved from "https://truecapitalist.miraheze.org/w/index.php?title=Herman_Cain&oldid=18869"
Categories:
Cookies help us deliver our services. By using our services, you agree to our use of cookies.