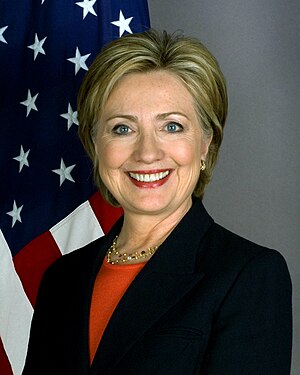 Being a woman in power, and being a Democrat, it is no surprise that Ghost looks on Hillary with great disdain. As the 2008 presidential race built her popularity up, Ghost took every opportunity to call her out for slandering the opposition. Once she lost the nomination to Obama, he moved on to the bigger target, but kept an eye on what he deemed a serious feminist threat. Ghost often calls her Hillary Rotten (Clinton) whenever she is brought up as a method of referring to her full name, Hillary Diane Rodham Clinton, to both insult her and/or to highlight her controversial political background and actions that make her personality and overall public appearance virulent and untrustworthy simultaneously.

Upon the return of our host, Hillary again became a topic of discussion on the True Capitalist Radio Broadcast. She eventually defeated Bernie Sanders for the Democratic Party Presidential Nomination and proceeded to run against Ghost's candidate, Donald J. Trump. As a result, Ghost has increased, more than ever, his attacks against her. Hillary Clinton, and things related to her, have become among the most frequently covered topics on True Capitalist Radio.

Ghost has mentioned that there are a startling number of people who have 'just dropped dead' around the Clintons, frequently refers to her unreliability and email scandals and considers her to be a bureaucratic scumbag. He believes that she, along with Barack Obama, have helped to create ISIS. Ghost, long before the Return, back in 2012, frequently criticized her and Obama's actions in the Middle East, including Syria and Libya.

Ghost has often attempted to break stories about Hillary Clinton, listening to, at length, serious callers who claim to have found dirt on her or have found 'suspicious material' (as Ghost says) regarding her or her administration.

On September 11, after giving an address at a 9/11 memorial, Clinton mysteriously fainted, with her campaign officially claiming that it was due to pneumonia, but with various theories about her being more gravely ill circulating as well. Ghost and many other right-wing commentators reacted with both glee that their longtime enemy was now ailing, and fear about who the Democrats might select to replace her if she indeed became incapable of continuing her campaign. Ghost's proposed replacements include Joe Biden, running mate Tim Kaine, Bernie Sanders, Obama suspending the election and taking a third term, or Bill Clinton supplanting his wife at the position of the Presidency and taking a third term (which Ghost insists could happen and that anyone that denies it is "an idiot" despite the supposed possibility having zero precedent whatsoever).

In the days close to the result of the elections, Ghost stated that if Hillary wins, he will end the show for good. However, he went back on this claim in Episode 386, saying that he believes that Hillary will not be able to retain power even if she wins, and that he will not go anywhere, no matter what happens.

In spite of all polls and pundits, Hillary ended up losing the 2016 elections to Donald Trump, much to the joy of Ghost.

Retrieved from "https://truecapitalist.miraheze.org/w/index.php?title=Hillary_Clinton&oldid=15166"
Categories:
Cookies help us deliver our services. By using our services, you agree to our use of cookies.