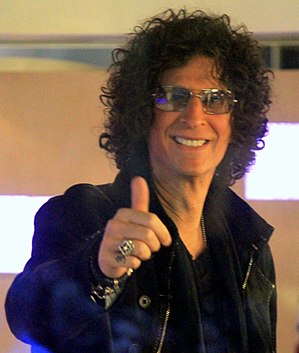 Howard Stern is a controversial American radio show host. Ghost, himself the host of True Capitalist Radio, views Howard Stern as a "disgusting waste of human life" and part of "the reason why we are living in Junkyard America."

Howard Stern is one of Ghost's weak spots and has been used to troll him in various ways. Ghost has even accused Stern of stealing his ideas for his own show.

Howard Stern has his own little set of trolls, however, and whenever they come onto Ghost's show, he gets upset and blames Stern for attempting to draw listeners away. While the Howard Stern trolls have since disappeared from True Capitalist Radio, but Ghost's accusations of Stern ripping him off still pop up periodically.

When the show was called True Conservative Radio, "Howard Stern fans" sometimes raided Ghost when he called Stern out for siphoning his listeners. He hated (and still hates) Howard Stern, calling him an old "has-been with a wig." The accusation of siphoning off listeners persisted even when Ghost's show was renamed to True Capitalist Radio in.

On Episode 122 of True Capitalist Radio, he went on a lengthy tirade about Howard Stern during Radio Graffiti. Moreover, during Episode 204, a caller got through Howard Stern's show with an audio splice of Ghost and it was played on Radio Graffiti.

On The Return, the first caller played a clip of Howard Stern talking about how a radio host he knew would play a game he called Radio Graffiti, where callers could say anything they wanted, "Hi, you're on Radio Graffiti Days!". Ghost was surprised to hear Howard talking about his show, until Howard said that it was the worse thing ever. Ghost had a moment of rage, saying how he didn't appreciate Howard talking badly about his show. However, Howard was referring to an old show that predated both Ghost's and his own. Meaning that Ghost possibly stole Radio Graffiti from someone else.

Retrieved from "https://truecapitalist.miraheze.org/w/index.php?title=Howard_Stern&oldid=14206"
Categories:
Cookies help us deliver our services. By using our services, you agree to our use of cookies.