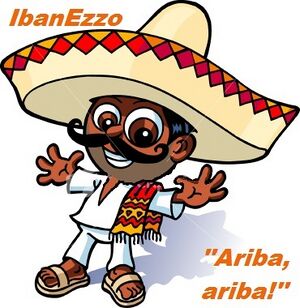 IbanEzzo is a long-time former caller/troller and resides in Groningen, Netherlands. IbanEzzo was also one of the first trolls Ghost ever had, and has been around since the show was named True Conservative Radio. Next to Internet Buttstalker and Ghetto Capitalist he was one of the longest trollers of Ghost to date. He had not returned when Ghost came back in 2016.

His calls are usually very short before Ghost hangs him up. His calls usually consist of the line, "Ghost, it's your favorite Mexican!" Often followed by a Spanish yelp. Ghost hangs him up and shouts, "Get that stupid Mexican wanna-be, European Arab-immigrant off of here."

IbanEzzo has been a longtime chatroom user. During the time when Ghost would regularly give chatroom shoutouts, he was kicked out as frequently as Spermy the Cat. Ghost would say, "Get that stupid Mexican wanna-be out of here; get em' out!"

During a PalTalk session on February 11, 2012, a user by the name of u_abusebeercans released Ibanezzo's dox. Shortly after IbanEzzo's dox was spammed in the PalTalk chatroom by u_abusebeercans, along with his acquaintance's dox being spammed by Gasgara, Ghost was very pleased. The dox, however, was false.

Eventually his real dox was released, with information pointing to him living in the Netherlands, and his name being 'David'. Ghost took it upon himself to give him a series of calls during a PalTalk session late January, and eventually released his information at the end of the tirade, effectively halting IbanEzzo from calling again.

Retrieved from "https://truecapitalist.miraheze.org/w/index.php?title=IbanEzzo&oldid=13881"
Categories:
Cookies help us deliver our services. By using our services, you agree to our use of cookies.