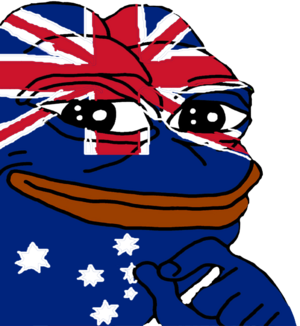 InsaneEnergy, formerly known as Make Australia Great, was a former Inner Circle member, a former mod in Ghost's Chatroom, the former owner of the Capitalist Army Discord, a blogger, and the primary video uploader of True Capitalist Radio's Shoutouts and Radio Graffiti segments following bmar896 taking down his uploads. InsaneEnergy's significance in the community began following the start of the Second TCR Cold War, when he was doxed, and accused of being behind the Cleveland Show Calls.

From December 2017 until Ghost's temporary leave in March 2018, Insane was a troll on the show, with his names infrequently appearing during Chatroom and Gab shoutouts, and some occasional calls during Radio Graffiti. Following some drama towards the end of 2018, Insane has ceased uploading TCR content and partaking in the chatrooms and their respective drama.

Insane is currently the primary uploader for TonyTalk content, and has also created a TonyTalk wiki on Miraheze.

Despite having listened for some time, InsaneEnergy did not gain attention until the Inner Circle Bounty Hunt began, as one of the many people doxed in that incident. Over the months of May and June, a lengthy battle played out on Twitter, Discord, and Gab between many trolls in the community and Insane, particularly to do with the accusation that he was behind the Cleveland Calls. This, coupled with many in the community's animosity towards Inner Circle members, led to a major back and forth between the two groups.

During Capitalist Episode 497, Insane called Ghost a "Jewish merchant" while in the Inner Circle chatroom. This caused Ghost to rage really hard, kick Insane out of the IC chatroom, and go on an explosive rant over the youth of America and Trumping Capitalist. Insane returned to the chat a few days later.

On June 30th, 2017, Insane was banned from the Inner Circle due to him pushing the discussion towards a leaked Pastebin containing a roleplay between 8Equal and Prankie Pie. Following this, Insane and a fellow former IC member attempted to form a new chat, as Tub Guy's had seemingly shut down on the same day, however, the chat was shut down overnight due to Inner Circle raids.

On July 9th, Insane seemingly left the community, growing tired with fighting the trolls, having lost Inner Circle membership, and the show missing its supposed July 4th return date. Some minor scuffles occurred over Gab in the intervening months, but the majority of it was over.

Following Ghost's announcement of his return, DeplorableCapitalist started a new TCR Discord, of which Insane quickly joined, and became a moderator in. Following this, the TCR Chatroom Cold War began.

After the end of the TCR Chatroom Cold War, Insane gained ownership over the TCR Discord, which was renamed the Capitalist Army Discord shortly after. Insane later joined Ghost's chatroom, and was made moderator.

Starting in December 2017, InsaneEnergy learned how to call the show, occasionally calling in with other people's splices. From then until Ghost's break in March, he frequently made appearances during Gab and Chatroom shoutouts, and made his own splices. Notably, he teamed up with Tub Guy and DistillingCapitalist in a confessions-like call on Capitalist Episode 546.

Return to the IC

In February 2018, Insane returned to the Inner Circle. In March 2018, he started his own blog, and killed off his old username of "Make Australia Great" as described in an article on said blog.

On March 15th, he announced his departure from the Capitalist Army chatroom, stating he didn't have the time to manage it anymore between all other things he was doing, such as college and managing the blog. On March 16th, following the results of a poll, the chat was handed off to a moderator of the chat, Terry A Davis, before leaving the chat for good.

On April 1st, after bmar896's videos went down, Insane began archiving bmar's old content on his YouTube channel, as well as initially making edits of the new run of TCR. On May 17th, InsaneEnergy put a temporary stop to his videos due to not wanting to appease trolls who only wanted to listen to Shoutouts and Radio Graffiti, however, he later went back on this and began uploading again a few weeks later, in particular after a copyright strike on one of his videos.

On July 12th, with the help of the TCR Chatroom, Insane wrote an article that was posted on Ghost's Gab over the doxing and exposing of QAnon, a poster 4chan and 8chan's /pol/ boards. The next day, he would write a follow-up, which once again was posted by Ghost on his gab, as well as detailed on the air on Episode 591. This article would later also be linked on an article regarding QAnon that Ghost himself wrote on ghost.report.

Following TheBronyNetwork's purging from the Inner Circle, InsaneEnergy became one of the people who relay TCR via Youtube, and usually streamed on days when other people are unable to handle the stream. However, due to a Community Guidelines strike for "Hate Speech" on an upload, Insane was barred from streaming for 3 months.

Insane would be at the center of some chatroom drama during Episode 607, due to people in the chatroom copying his name and profile picture, scrolling the chat with racial slurs under his name as a means of trolling him, eventually pissing off Ghost, putting him in a bad mood until he eventually rage quit the show during the third hour. During the following show, Episode 608 the situation would be expanded upon, with Ghost claiming how many of the people involved in this trolling were either purged or left the Inner Circle, as well as discussing some of the perceived poor life decisions these individuals made, although later it would be revealed many of the people who partook in this were a part of the chatroom, and not the IC.

Following the midterms, InsaneEnergy has left the community.

On November 16, 2018, Insane posted onto pastebin his current thoughts about Ghost, saying that he began to represent the type of people he hated. Insane also stated that he stood up to Ghost on Gab, and Ghost threatened to contact his parents. Insane refused to be intimidated by Ghost's threats, referring to him as a "bitter old drunkard who is completely out of touch from the world," and stated that Ghost would not do anything. Insane also questioned why anyone would want to support Ghost, the man who once said people should look towards him, and now finds him to be a loser, in his current state. Also on the post, Insane said that he is considering uploading TonyTalk videos, and he began to do so on December 3rd.

Following Ghost's announcement that he would be leaving the internet, Insane said in a blog post that the Capitalist Army blog would be shutting down, as the midterms were finished and Ghost, and by extension the Capitalist Army, were no more. The Youtube content continued however, as on November 23rd, Insane began uploading whole episodes of TCR, picking up where BN King and AustralianCapitalist left off with their uploads. These uploads concluded on January 5, 2019 after Episode 640's upload.

Following Ghost's return to Gab on November 26th, Insane continued to post at him, until Ghost began confronting InsaneEnergy in his own Gab post, further doxing him by releasing his home address. Ghost would later delete these posts, presumably due to Insane stating he would contact Andrew Torba over the posts. Ghost would continue posting into the 27th, where Insane made a video claiming to have doxed Ghost. Shortly following this, Ghost's gab was either deleted by Ghost himself, or banned due to the aforementioned posts, with someone under the name of RifleKickSix taking over his Gab handle. A supposed backup Gab surfaced shortly after under the handle @GhostPolitics, however there is no confirmation this is Ghost, and the "About" page on ghost.report has no new Gab listed, with Ghost claiming he was banned for "making fun of autistic trash". The account promptly made more threats to Insane, said it was done with the internet, and was deleted/banned from Gab shortly after. Following this, another troll occupied the Gab account.

Moving On and Return to Uploading

After the November 2018 Ghost Doxing Incident, community drama died down significantly, especially when it seemed that Ghost's message would be the final one he would make on the internet. However, Ghost soon returned on New Year's Eve with a new show, The Ghost Show. Insane made a response, stating was that he was backing away from the community and would no longer get involved with it further. Following the conclusion of his full TCR episode uploads, Insane said that he was done with Ghost and TCR content, aside from a few odd uploads, due to bmar896 and Lightning Note returning to uploading, as well as Ghost himself streaming the episodes and having the full streams available on Youtube. During The Ghost Show Episode 3 and Episode 4, some donations came in referencing Insane, to no or little response from Ghost. Insane quickly denied donating to Ghost, specifically due to the events of the November 2018 Ghost Doxing Incident, a point reinforced by the fact that anyone can use any name on Streamlabs to donate.

During January 2019, Insane closed his Gab account after most people related to TCR moved on from Gab following Ghost's banning, and not using the site for much outside of that. The account name is still active to prevent people taking the name, however all the posts are deleted, save for one explaining why the account is dead.

Following bmar896 quitting uploading Ghost content again, Insane reaffirmed he would not return to begin uploading new Ghost highlights. However, after much consideration he later went back on this, and began uploading content from The Ghost Show. Following some further drama and donations under his name the uploads would once again cease, and Insane would continue uploading exclusively TonyTalk content.

Retrieved from "https://truecapitalist.miraheze.org/w/index.php?title=InsaneEnergy&oldid=19623"
Categories:
Cookies help us deliver our services. By using our services, you agree to our use of cookies.