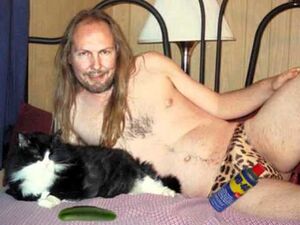 “Ghost : Pauly Robertson, you're on the line.

The Buttstalker : "Ooh, take me down to the Krusty Krab babycakes-"

—One of the Buttstalker's finest calls.

The Internet Buttstalker(s) is a long time caller of the True Capitalist Radio broadcast. His calls consist of him sexually harassing Ghost, and beckoning him towards various homosexual activities, and speaking with a very effeminate voice.

There are possibly several Internet Buttstalkers, and they usually called in with various area codes usually 111 or 000, and Skype names, most commonly Willy Robertson. Ghost usually responds by shouting "Get em' off!", and then hanging up and mumbling about him "...calling me every goddamn day", and sometimes, although less frequently in late 2011, cans'ing and going into a massive rage. For their part, the Buttstalker(s) refers to Ghost as "baby buns".

The Buttstalkers themselves are members of the Bill Waggoner Crew (BWC), whom actively targeted Ghost's show in its infancy. They began calling Ghost in as early as 2010, and although he initially was bemused by their overt femininity, quickly came to detest their constant advances. They indeed called every single broadcast up until mid-2011, sometimes up to ten times per show.

Once 4chan and other forums overran Ghost's listener base, the Buttstalkers slowly started to disperse, as calling in consistently became more difficult with the mass of spam on every show.

The Internet Buttstalkers are no longer regular callers. After an extended hiatus, "Willy Robertson" (one of the main Buttstalkers) called in during a Capitalist Confessions segment on January 9th, 2012. During the call Ghost asked him, "Where have you been?" to which he responded that he "got a job" at a fast-food establishment and he's been busy servicing glory-holes there. Ghost then quickly cut him off.

Following the temporary demise of True Capitalist Radio, most trolls went into silence, but the Buttstalker made a short comeback, along with the Ghetto Capitalist, Tub Guy and numerous trolls in a two month series of raids on the Psychic Kay show.

As of the Return, the Buttstalker has not called into the show, however a number of trolls have played older clips of him, still causing Ghost to rage and reminisce his unhappiness on having to take their calls "every god-damn day". Also, Montie of /mu/ fame was able to replicate the general sound on several calls and managed to get Ghost pissed off.

In May 2016, Daniel Bryan Splices, and other Mid-Show Splices have become very frequent chain-callers and Ghost has compared them to the Internet Buttstalker in their growing ubiquity on the broadcast.

During Episode 530, Ghost found a link to an old YouTube video of the Internet Buttstalker peeing in a bathroom stall, much to his disgust.

The Internet Buttstalkers were known for often being one of the most frequent callers. They would occasionally make it onto Ghost's show several times in a row, sending him into a raging fit shouting "How many numbers does this idiot have?", and raging hard at them. The Internet Buttstalker calls are usually very short (because Ghost ends them in disgust) and sexual. They beg Ghost to have homosexual relations with them. They are known for their feminine vernacular and rapid speech. Their calls often relate to the topic Ghost is discussing, or sometimes are just a variation of a common meme, such as Mudkips or My Little Pony.

Retrieved from "https://truecapitalist.miraheze.org/w/index.php?title=The_Internet_Buttstalker&oldid=13912"
Categories:
Cookies help us deliver our services. By using our services, you agree to our use of cookies.