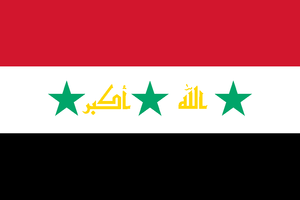 Iraq is a country in Western Asia in-between Syria, Turkey, Iran, Saudi Arabia, Jordan, Kuwait, and the Persian Gulf. Historically, Iraq was the center of the Abbasid Arabic Islamic Empire, and holds much historical interest tied to the Islamic Golden Age, as well as the Ottoman Empire, but is most associated today with the 2003 invasion of Iraq and the proceeding war.

After George W. Bush called Iraq a member of 'the axis of evil' (along with Iran and North Korea) it was decided an invasion must take place, despite public opposition. By the end of the year the whole country was occupied, and Saddam Hussein was removed from power. However in the following years, even after Hussein's execution in 2007, tension between political groups meant some violence remained. By 2009 Bush had allowed U.S troops to withdrew from major cities. This continued until Obama declared the war officially over in December 2011.

Ghost and the True Conservative and Capitalist broadcasts supported the war as a grim yet unavoidable conflict. Once insurgent forces showed they were still active throughout 2011, this gave Ghost a chance to go off on Obama's troop withdrawal, questioning his 'leave with our head held high' attitude. He has also demanded Iraq pay back its debts to the U.S with oil.

In the Return of True Capitalist Radio, Iraq is still under siege by ISIS forces who invaded and toppled over cities en masse in Iraq and Syria from 2014-15, setting up many bases of operations in both countries.

Retrieved from "https://truecapitalist.miraheze.org/w/index.php?title=Iraq&oldid=9608"
Categories:
Cookies help us deliver our services. By using our services, you agree to our use of cookies.