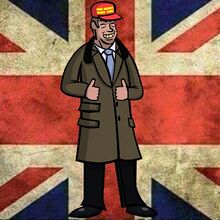 Jimmy Capitalist is a member of Ghost's Inner Circle & serious caller on the show. He occasionally calls up to discuss topics related to right-wing politics such as Brexit & immigration. He has a distinct Northern Irish accent which is often disputed as being Scottish when he calls in. Jimmy is also a part time troll and can be seen on twitter during the broadcast attempting to agitate Ghost with photoshopped images and memes. Along with Yorkshire Capitalist, Jimmy was responsible for the mass betrayal which caused Ghost to rage quit on Episode 363. This troll is widely regarded as one of the best calls since Ghost's return and sparked what is now known as The Week of Betrayal.

Jimmy holds serious right wing political views similar to those of Ghost, stating on Episode 277 that he believes those who don't pay taxes are worthless to society. Ghost reacts well to Jimmy's calls often agreeing with him and thanking him for his insight. To date, Ghost has been unperturbed by Jimmy's trolling antics and hasn't reacted negatively to any of his calls, it must be noted that on Episode 365 Ghost was agitated when reading Jimmy's name during Twitter Shoutouts. It was revealed during Episode 373 that Jimmy is in possession on Ghost's Autograph #001 which Ghost claimed he is selling for $1000.

On Episode 382 Jimmy gave a victory speech as the leader of the #BanTeutonic movement, thanking all those who took part. Evidently it was also his birthday, leading Ghost to sing a rendition of Happy Birthday.

After some rumors began floating around that Jimmy may be a father, some trolls created names about it. However people who often visit Ghost's chat sessions on Paltalk knew about this, since he confessed that he had sex on his birthday and didn't use a condom. However, it was later confirmed that he did not end up being a father after all.

Since Ghost's hiatus, he has not been heard from.

Retrieved from "https://truecapitalist.miraheze.org/w/index.php?title=Jimmy_Capitalist&oldid=13882"
Categories:
Cookies help us deliver our services. By using our services, you agree to our use of cookies.