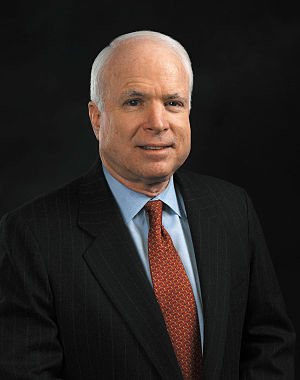 Ghost, while hosting the True Conservative Radio broadcast, held a highly negative opinion of McCain. He called him out as not being a 'True' conservative, and cited him as a herald of the downfall of the Republican party (along with Sarah Palin). He began referring to him as John "Turncoat" McCain. In True Capitalist Radio days, Ghost has also called out John McCain as a warmonger because of his aggressive foreign policy and RINO because of the above mentioned lack of 'True' conservatism.

Despite this, Ghost has stated that he does respect McCain as a fellow Vietnam War veteran, knowing that life as a prisoner of war must have been rough. Later on, with his return in 2016, Ghost changed his mind about this. Ghost came to believe that McCain had used his high ranking father as a bargaining chip during his days as a prisoner of war and given up sensitive information to Vietcong in an attempt to save his own skin. He later tweeted out McCain's broadcast when he was a POW in Vietnam, calling him a traitor to the US. He became enraged with him and other GOP turncoats after they turned their backs on Donald Trump after a tape containing lewd remarks about women was leaked.

Ghost was rejoiced by the news his death on August of 2018 and reacted with glee on Gab, hoping that "Satan is raping McCain with a hot pitch fork right about now", and then celebrating it on the next episode of the show. 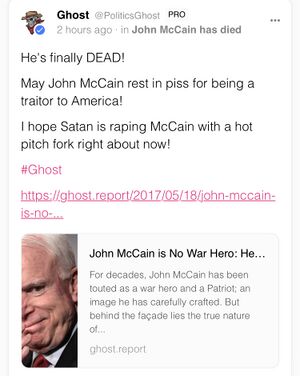 Retrieved from "https://truecapitalist.miraheze.org/w/index.php?title=John_McCain&oldid=19352"
Categories:
Cookies help us deliver our services. By using our services, you agree to our use of cookies.