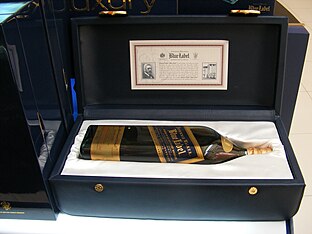 Johnnie Walker is a brand of Scottish whisky frequently purchased, talked about and consumed by Ghost. Johnnie Walker Blue Label is Ghost's most frequently discussed variation and he can be heard taking sips of it nearly every broadcast, though he has also commended Gold Label and various others such as Red, Green and Black over the years. Blue Label is considered to be one of the most expensive scotches on the market.

Ghost eventually stopped drinking Johnnie Walker, due in part because the company endorsed accepting refugees, showed their support to feminism by launching the Jane Walker product line, and also as of March 2017, thanks to Ghost trying to stop drinking due to his poor health.

During Radio Graffiti on Capitalist Episode 243, a troll called in saying that Ghost was drinking "Johnnie Roller, Bureaucrat Label, Sell-Out", causing cans.wav. Another troll called in later to say the same thing, and got cans as well.

One of Twilie Atkins' first calls was calling Ghost up and stating that because she didn't join his "stupid friends club (the Inner Circle)", she had enough money to buy a bottle of Johnnie Walker, causing cans.wav and Ghost to go off on a rant of how she could only wish she was a part of the Inner Circle.

After Shoutouts during Episode 524, Ghost was hit with a Gab post of "Johnnie Walker Blue Label Ghost in Cripple", causing him to get very pissed off and shout "fuck you" twice.

Retrieved from "https://truecapitalist.miraheze.org/w/index.php?title=Johnnie_Walker&oldid=13138"
Categories:
Cookies help us deliver our services. By using our services, you agree to our use of cookies.