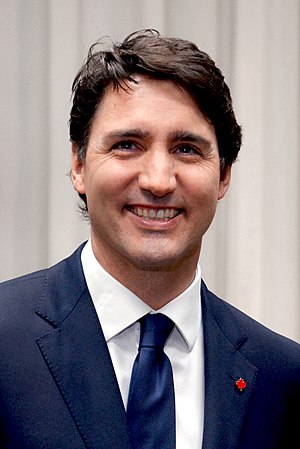 Justin Trudeau is the 23rd and current prime minister of Canada and leader of the Canadian Liberal Party. During his tenure as prime minister, Trudeau has been a vocal advocate of womens rights, social justice, immigration, multiculturalism, and legalization of Marijuana which has made him especially popular among millennials.

Being considered the polar opposite of Donald Trump politically, it's not surprising that Ghost absolutely loathes Trudeau and often refers to him as "Canadia's fruitbowl Prime Minister". Trudeau became a subject of discussion in Capitalist Episode 400 after he had made controversial statements defending the then-recently deceased communist leader Fidel Castro. After hearing these statements, Ghost's conspiracy senses began tingling and he brought up a conspiracy that was recently becoming popular on the internet that claimed Trudeau is actually the son of Fidel Castro.

Retrieved from "https://truecapitalist.miraheze.org/w/index.php?title=Justin_Trudeau&oldid=14855"
Categories:
Cookies help us deliver our services. By using our services, you agree to our use of cookies.