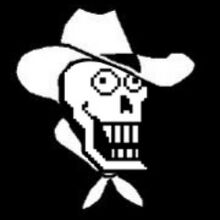 KaraszKun (real name Eugene Karasz) was a serious caller and a member of the Capitalist Army who happens to have Asperger's Syndrome. He seems to greatly entertain Ghost, often receiving unusually large amounts of air time during Radio Graffiti as a result. Like other serious callers, antagonizing Ghost is not his goal and he seldom disagrees with the topics Ghost discusses. Ghost takes his side on most issues and seems to think that KaraszKun's voice resembles Lou Ferrigno's (a bodybuilder who voices the Incredible Hulk). He is, as of 2018, a former member of the Inner Circle.

KaraszKun made his first call during the 2011 Ghosties awards episode, attempting to give an acceptance speech for The Harbingerr. However, Ghost did not take him seriously at the time, calling him an Asian ("It's not 'herro', it's 'hello'") and eventually cutting him off, telling him to "go drown in a rice paddy!" Any calls KaraszKun made to Ghost until April 2012 were hung up on, as Ghost thought that he was a stumbling failtroll. Nevertheless, KaraszKun continued trying to have a conversation with him, and finally succeeded in April. KaraszKun's real rise to prominence occurred after the 4/20 episode. KaraszKun was another caller of the first run of True Capitalist Radio to return after the 4 year hiatus.

KaraszKun's marital status is currently single, something Ghost wishes to rectify by finding him a date.

KaraszKun initially gained a lot of hatred from the troll community in 2012 because of the extensive amounts of air time that Ghost wasted with him. However KaraszKun managed to gain the respect of the troll community after the Return when he started to occasionally take part in trolling himself, and was quickly overshadowed by much more hated new serious callers such as Teutonic Plague and G.

KaraszKun regularly tweeted from the account @karaszkun about world affairs, often sending messages and conversations to Ghost. Generally, Ghost exclusively responded to him alone, highlighting his favoritism for KaraszKun. However, this account was later hacked, and he has since moved to @Karasz, later @karasz_kun. As of November 2017, he goes by the twitter name of @e_karasz.

KaraszKun is responsible for Ghost's avatar from September 2016 to autumn 2017, as well as all of the artwork on Ghost's autographs and apparel, besides the original Ghost autograph, which was made by Ghost himself.

With the movement of Net Neutrality, KaraszKun, on the night of November 22, 2017, was listening to Ghost's broadcast and did not like what he had to say about Net Neutrality. He immediately sputtered up in a Twitter Chatroom, spewing out death threats to Ghost and a few others, publicly as well on that Twitter Chatroom, being in a complete rage after Ghost called Net Neutrality bullshit. Ghost found partial dox on Karasz along with his family member's phone number, which he called later, along with KaraszKun's phone number, ringing them off the hook. He, later, at around 4 am CST, got destroyed by Trumping Capitalist, InsaneEnergy, and others on Twitter. KaraszKun was occasionally referenced by Ghost following this event, describing him as a "30-something year old manchild who still lives with his parents", a far cry from his earlier, more favorable descriptions of Karaszkun.

On Episode 221, as Radio Graffiti was starting to flag, KaraszKun called in, and Ghost started an impromptu segment called "Ask KaraszKun" where callers could pose him questions. Most of these were just trolls like Ghetto Capitalist or bronies. In this segment, KaraszKun revealed his love for cappucinos, rabbits, Teenage Mutant Ninja Turtles, and Regular Show, all while misinterpreting a lot of what the callers were asking him.

On Episode 417, Ask KaraszKun returned as part of Ghost's 600 episode special. This time, most of the callers were gay like Germit, and they were asking to do sexual actions with KaraszKun. Jimmy Capitalist also called and asked for a drawing of Ghost, the Engineer, and Tub Guy all playing around in the tub. Both Ghost and KaraszKun got disgusted by all of the callers. KaraszKun also revealed his hatred for goat meat.

KaraszKun closed his Twitter account a few days after Halloween out of anger from the negative activity on the gh0stp0litics account, but re-opened about a month later. His old account (@KaraszKun) was hacked, presumably by CelticBrony or someone impersonating him. The account was taken back and left behind by someone after the hacker gave up the password publicly. KaraszKun later moved twitter accounts to @Karasz, and later to @karasz_kun

In October 2016, members of the Capitalist Army found nude art KaraszKun had drawn. Knowing it would piss Ghost off, they began to spread it to try and get Ghost's attention, but it reached KaraszKun first, saying he had no problem drawing it. This came to a head on October 6th's show, when he was called on during Radio Graffiti, and began talking to Ghost about the things he had drawn. Initially starting out fine, it got bad once he started using more colorful language to describe the art he had drawn and told Ghost he was making no money off it, but plans on it. This eventually led Ghost to start crying and going into an incoherent rage again, as he felt betrayed by another close member of the inner circle, as the previous few shows had followed this trend with people like Teutonic Plague supporting Team Engineer in the TCR Civil War.

After the "G Suicide Hoax Incident", Ghost stated in the Paltalk that he already knew KaraszKun drew that stuff, and commended him for taking the "betrayal" gag like a man as opposed to how G acted.

In the Twitter Shoutouts of Episode 369, he not only gave KaraszKun a shoutout, but also expressed concern for him as he lived in the path of hurricane Matthew. This, as well and the aforementioned "betrayal gag" possibly means the entire betrayal week was an inside job.

The Downfall and The Return

During The Break, Karaszkun left the Inner Circle, supposedly under pressure from someone to do so. His Twitter soon became filled with anti-Trump posts, which left a sour taste in many Inner Circle member's mouths.

On Episode 509, while Ghost was discussing Net Neutrality, DMs were leaked from a conversation with KaraszKun, where he outright threatened to kill Ghost over his stance on Net Neutrality. Ghost saw these posts, and attempted to call his phone, however he got no response. KaraszKun would later backpedal in further leaked DMs and attempt to apologize to Ghost via Gab.

Following this, Karaszkun would double down on his remarks on Ghost, as more leaked screenshots from various chats (including his own) would come to light. Ghost would then have a very unfavorable opinion of KaraszKun, and mention that he paid him upwards of $1000 for art (mostly autographs), which he regrets.

During Early 2018, there was a minor troll supposedly by Karaszkun as a "wild jahoody". This was later revealed to be a member of Ghost's Discord that sounded like Karaszkun.

After one more small raid by Ghost's Discord on Karaszkun's Discord server, Karaszkun would attempt to make peace by contacting members of the chat. After talking to InsaneEnergy, he posted an apology to the chatroom, and eventually paid to come into the chatroom and made amends with Ghost and the community.

Karaszkun would make another appearance on Episode 600 during Radio Graffiti, where many callers and members of the TCR chatroom began talking about Karaszkun negatively after seeing that he was playing a game during a show, and said game turning out to be anime related. After many calls, Ghost would say that all of this would be settled in the chatroom after the show, and asked Karaszkun if he was prepared for the "thunderdome". It was confirmed after this show that Karaszkun had been run out of the chat following the show, with him leaving on his own to avoid further conflict. He is still semi-active on Gab, occasionally posting articles.

Retrieved from "https://truecapitalist.miraheze.org/w/index.php?title=KaraszKun&oldid=13884"
Categories:
Cookies help us deliver our services. By using our services, you agree to our use of cookies.