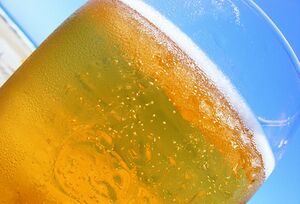 “I'm not one of those beer-bellied assholes who grabs the same damn Kentucky-Fried Chicken Piss and drinks it to get buzzed for 40 years! I am a connoisseur, assclowns!”

—Ghost, on the topic of good and bad libations.

Kentucky Fried Chicken Piss is a term used by Ghost of True Capitalist Radio to deny allegations of alcoholism from any caller accusing him of being an alcoholic. Rather than admit that he sometimes drinks quite a bit, he will place the blame on Junkyard America's poor taste in spirits.

Ghost claims that he likes to be able to taste his alcohol completely, and therefore will only buy 'the best' of the best - whether this is Jonnie Walker Second Harvest Blue Label, Miller High Life , or Dom Perignon (Dom 'P', which he consumed in excess during the Ghosties ) champagne. He claims that cheap assholes too poor to come out of the pocket with their consumptions will instead purchase a 'two-bit brewery company' spirit and drink it to their deaths, dying of liver poisoning over a long period of time.

Strangely enough, Ghost seems to believe that the more expensive an alcohol is, the less damage it does to one's system, yet the alcohol content in a bottle of Blue Label  (which Ghost frequently claims to drink each broadcast - sometimes multiple different spirits after or before it) is 40% - quite too much for most people. Ghost has gotten very drunk on many of his broadcasts (most infamously the broadcast the day before the Spontaneous Saturday in August 2011), and may start making incoherent ramblings during Radio Graffiti along with the extreme fits of rage that goes along with this.

Retrieved from "https://truecapitalist.miraheze.org/w/index.php?title=Kentucky_Fried_Chicken_Piss&oldid=10185"
Categories:
Cookies help us deliver our services. By using our services, you agree to our use of cookies.