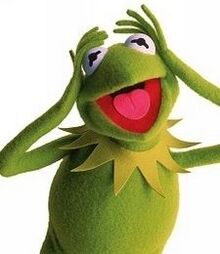 —The real Kermit's catchphrase, and how TCR's Kermit began most of his calls

“You're just mad because Miss Piggy is doing Gonzo's nose and loves it. You stupid little fruity-ass frog.”

—Ghost responding to one of Kermit's calls on Episode 260

Kermit the Frog was a longtime caller and troll of True Capitalist Radio. He has called several times a week since long before Ghost's Absence and was a frequent voice heard during Radio Graffiti. Coodoo17 also did impressions of the character in the past.

Kermit's calls usually included some kind of zestful plan the frog had hatched related to a subject on Ghost's show (usually one he was not in favor of). Ghost always reacted with disbelief, citing him as a "freaky little frog".

Kermit's most famous call was of him telling Ghost stating that he gotten involved with clopping, which has gotten him in trouble with Miss Piggy.

Kermit returned in 2016, and had taken a different turn with his calls. Ghost criticized the troll, commenting he needs to get some 'Jewish writers' to produce funnier content.

The creator of the character has since declared that he will 'hang up' the persona for some time due to the gradual unfavorable reactions he has received for it.

Sometime after Kermit was retired as a character, a new troll named Germit the Gay Frog, a homosexual version of the famous frog, started calling Ghost in the summer.

Much like Kermit, there was another troll who called in during Spring 2016 who did a Mickey Mouse impression. Other character impression trolls following Kermit included Elmo, Fat Albert, Skeletor, and more notably, Eeyore.

Retrieved from "https://truecapitalist.miraheze.org/w/index.php?title=Kermit_the_Frog&oldid=18690"
Categories:
Cookies help us deliver our services. By using our services, you agree to our use of cookies.