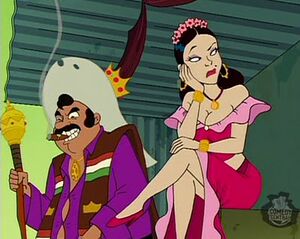 King of Mexicans is a self appointed titled used by Ghost, the host of the True Capitalist Radio. On August 11th, 2011, Asho made one of his early calls with an older brother in the background. Ghost put on some Spanish music and began to dance. After dancing around for a few minutes, Ghost asked the Mexicans what they thought. The older brother declared, "We are having Ghost is a Mexican day; we are baptising you as a Mexican."

"It's August 11th, 2011, I am now officially declaring myself the King of Mexicans!" Unfortunately for him, Ghost's self-appointed title led to even more racist Chatroom spam, calls, and Splices. Many Mexicans call into the broadcast accusing him of racism, and cite this as one of the reasons they dislike him.

Ghost turned it into a segment, and does it ever-so often, such as when a Radio Graffiti caller asked him on January 17th, 2012, or when Asho and one of his siblings call in.

Retrieved from "https://truecapitalist.miraheze.org/w/index.php?title=King_of_Mexicans&oldid=15600"
Categories:
Cookies help us deliver our services. By using our services, you agree to our use of cookies.