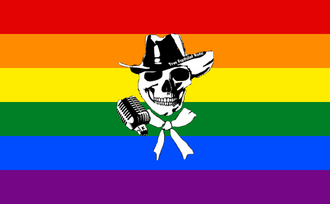 LGBT stands for Lesbian, Gay, Bisexual and Transsexual and is usually used in context of rights, acceptance and political movements. LGBT topics have frequently been discussed on True Capitalist Radio. Ghost says that he has no problem with gay LGBT people 'as long as they're capitalists' though they are a frequent source of his politically incorrect humor.

In the wake of the 2016 Orlando shootings, Ghost has claimed "LGBTQ" rights are now an important concern for American patriots, because of the apparent threat of Islam to LGBT people. He has mocked liberals for their inability to justify their support of both LGBT and Islam, and said that rational LGBT people should vote for Donald Trump to protect their rights from Muslim radicals.

After Ghost was banned from Twitter in June of 2017 for using the term "Poz-Hole", he has become increasingly hostile towards the LGBT community and has blamed them for trying to restrict free speech with their anti-hate speech rhetoric and for trying to normalize pedophilia.

Full page about Gays here and Lesbians here. Ghost has often made jokes about gays and lesbians, though especially gay males. Sometimes when younger callers or callers with higher voices (as most his callers are male) have called, Ghost has mocked them for being "overfeminized fruitbowls" and in the past even put on gay music and ordered them to dance to it. Because of this, and other behaviors, Ghost has sometimes been accused to homophobia. He responds to these accusations by pointing out that he doesn't care what race, gender or sexuality someone is as long as they're a capitalist and that his humor is all in good fun.

Ghost has been stalked by many homosexuals over the internet, most famously including the Internet Buttstalker, Tub Guy and Germit the Gay Frog.

One story Ghost has told repeatedly throughout the history of True Capitalist Radio and True Conservative Radio took place as he walked around Austin Texas. While walking, he accidentally let out a fart. A passing group of obviously gay males commented, 'Virgin, you're a virgin' and mocked him for the pitch of his flatulence.

Ghost has, since the Return, claimed that most gays are in it for 'purely carnal' reasons, as opposed to Transsexuals and Transgenders whom he believes actually want to live as the other gender and have a normal life.

He also mentioned the "Dick Hole" story in Episode 484, about a group of fruitbowls (in his words) looking at him when he was urinating in a bar in San Antonio. This story ended up spawning a bunch of sick sadistic Twitter names.

There is a full page on this topic here. As relating to their rights movements, Ghost believes that transsexuals don't need special permission to enter bathrooms of their chosen gender because 'if you actually looked like a woman, no one would notice' and that the North Carolina bathroom law, frequently discussed on True Capitalist Radio in 2016, is to prevent males wearing dresses with full grown beards from entering women's bathrooms.

His internet-relationships with transtesticles have caused him to have a more positive view of them than homosexuals and other LGBT groups. Ghost has claimed that transgender and transsexual people just want to live normal lives as the opposite gender from which they were born, as opposed to gays who are more interested in carnal pursuits. He believes that the transgender movement is based on legitimate concerns, and has been hijacked by "the LGB" - ironically in direct opposition to some LGB activists who want to "drop the T".

Retrieved from "https://truecapitalist.miraheze.org/w/index.php?title=LGBT&oldid=7712"
Categories:
Cookies help us deliver our services. By using our services, you agree to our use of cookies.