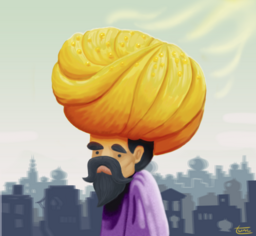 After the Arab Spring of 2011, and more specifically the Libyan Uprising that began in February, public support rallied round the Libyan rebels that sought to remove the dictator Muammar Gaddafi from power. However, in Ghost's view, he saw the rebel factions as "wild jahooties" rather than the brave underdogs the media portrayed them as, claiming they had ties with Al-Qaeda, citing CIA WorldFactBook as a source.

To combat this, Ghost started giving segments to "Mahmoud", an apparent spokesman for the Libyan rebels, while obviously just being another chance for him to put on an accent for five minutes. Ghost tried his best to lay every negative stereotype he could on the rebels, to try and push back the media's opinion. This would occur every time Libya was so much as mentioned, but more or less stopped with the killing of Gaddafi in October (which Ghost supported). He saw the Arab spring as a chance for Muslims to take over the world, and even suggests he thinks Barack Obama is a Muslim himself.

During the segment, 'Who is the Loved One' by Sami Yusuf plays in the background. Frequent topics mentioned by Mahmoud include paying taxes to Obama so he can implement sharia law, converting the world to Islam ('face Mecca now!'), and praising Allah. He always ends his segment with a loud, incomprehensible, Arabic-sounding hollering, often just compromising of the phrase "Meka Leka Hi Meka Hiney Ho" over and over, a 'Pee Wee's Playhouse' reference (he also uses this phrase, or variations on it, for Father Ghost and, occasionally, The Guru).

In a call in April 2016, Ghost reported he was now a lieutenant commander for ISIS, which Mahmoud confirmed, detailing the terrorists groups' plans to take over Europe through their guns and bombs.

Retrieved from "https://truecapitalist.miraheze.org/w/index.php?title=Mahmoud&oldid=10202"
Categories:
Cookies help us deliver our services. By using our services, you agree to our use of cookies.