“Half a tard
ain't got balls
wearing diapers and just 3 foot tall
he wears a mask...
They call him Masked Pony 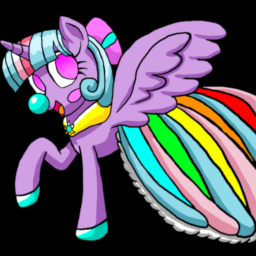 MaskedPony was originally a failtroll and common caller on True Capitalist Radio, and previously a caller on True Equestria Radio. He was reported to be autistic, but many have said that he makes it up for attention. He claims to have neurofibromatosis (a genetic disorder that causes tumors to form on nerve tissue) to explain his strange mental condition and way of speaking. He is responsible mainly for the 2016 MaskedPony Incident, the first major incident since Ghost's return to gain focus on and off the air. 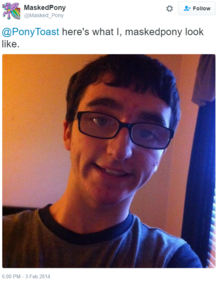 The Unmasked Pony in real life; MaskedPony claims to have sent a photo of himself to Ghost as well.

Before becoming a Serious Caller, MaskedPony used to call in the show and (usually unsuccessfully) troll Ghost. Among other things he ripped off Toilet Guy during his calls, an act that would (presumably by coincidence) later be repeated by G, leading into another notorious incident in TCR history.

MaskedPony used to call up almost every show talking to Ghost in an almost inaudible, babbling voice, but nevertheless Ghost himself actually liked MaskedPony for his humor and for being (what trolls call him) an "autistic version of Teutonic Plague". Though he had earned Ghost's respect, he was still a prime target for trolling due to the fact that Masked almost got Ghost to remove Radio Graffiti, and the fact that he was a brony (Ghost actuslly didn't mind that he was a brony, however).

—Ghost on June 6, 2016, after learning of MaskedPony's true colors

On June 6th, several trolls found MaskedPony's FIM Fiction account (FiMFiction is a My Little Pony fanfiction site) and were shocked to find that MaskedPony had writen several fics about the characters Twilight Sparkle and Rainbow Dash being in diapers. Masked got to talk with Ghost about it, but soon was kicked off with Ghost puking when Masked said that the reason for writing them was because he had bowel problems in the past. Even with this, Ghost yelled at him calling him a "half a tard padded pervert", and raged for 10 minutes straight, ending the show abruptly 24 minutes into the 3rd hour. Possibly the worst of these stories is one called "Padded Empire", this story is about Twilight and Rainbow Dash being brought to a kingdom where by law you are forced to wear a diaper and act like a baby. This story also showed off MaskedPony's tickle fetish. Though the pain for Masked became even worse as someone discovered his DeviantArt profile that illustrated his "Inflation" fetish, because of all this, Ghost has said that MaskedPony may be forever banned from calling into TCR, much to the trolls' happiness.

During one of the Tinychats' after show clear outs, TubGuy dumped an entire fan-fiction by MaskedPony into a pastebin for everyone to enjoy, warning those that did that they would require a bucket suggesting that no one could get through the whole thing without puking. TopBadge took this as a challenge and proceeded to read aloud the whole story running commentary on the parts that made no sense with co-commentary from MetroidJunkie and WillShank. TubGuy subsequently played the reading during the August 30, 2016 broadcast's Radio Graffiti, causing Ghost to go into another rage about people reading MaskedPony's stories.

Return to TCR and trolling

Despite his ban, MaskedPony returned in Episode 360 and Episode 362 to troll Ghost with Twilie Atkins. Due to the growing fervor around banning bronies from the show, the latter call was quickly cut off by Ghost who stated that he was "not even gonna let that finish" whilst calling Twilie Atkins and Masked Pony "sorry sacks of crap." He then began to call in on a semi-regular basis. He also mentioned in his Twitter bio that he's actually called up since the incident and trolled Ghost several times before the Twilie Atkins combo call.

In Episode 365, MaskedPony was also involved in the Bronies response to the "Betrayal" call of Episode 363 which turned the original call on its head by having several Brony fans of TCR (Twilie Atkins, MaskedPony, Disco Waffle, Liquid Schwartz and Scarlet Moon) endorse Team Ghost. This culminated in Hillary Clinton and the Engineer also endorsing Team Ghost, leading to much of the same rage from Ghost as the original call.

Ghost, at one point, claimed that Masked Pony was the Cleveland Caller. There is no evidence to back this theory and he was never seriously considered to be behind the calls. In all likelihood, Ghost blamed him for it just for the sake of giving himself and the trolls another excuse to bash him.

After the show of Episode 459, MaskedPony allegedly doxed SharpSplicer. Although, unfortunately for him, MaskedPony accidentally doxed himself. The day after, MaskedPony would say he did not dox him, that he doesn't know how to dox, and that he was going to leave TCR for good this bringing a question on who doxed both of them. Eventually MaskedPony came into terms with Sharp after learning that he had doxed himself accidentally on Dropbox comments section.

MaskedPony called in during Radio Graffiti of The Ghost Show Episode 3, saying that he was glad to have the show back. Ghost wasn't able to recognize him though and appreciated the cheers he gave.

Retrieved from "https://truecapitalist.miraheze.org/w/index.php?title=MaskedPony&oldid=19283"
Categories:
Cookies help us deliver our services. By using our services, you agree to our use of cookies.