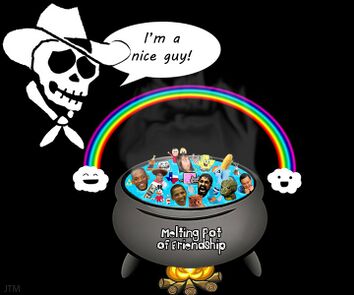 "Melting Pot of Friendship" is a term coined by Ghost , the host of the True Capitalist Radio broadcast, in an attempt to describe himself as a friendly non-prejudiced person. The phrase is often used when Ghost is called a racist, and is usually followed with the phrase "I'm a nice guy!".

Ghost derived this phrase from the term Melting Pot, which refers to the process of immigrants gradually assimilating to a dominant culture while retaining and bringing over some aspects of their own culture to their new country, most commonly used to positively describe how United States has been able to unite its highly multicultural population over the years.

Many trolls have changed the term to be negative, rather than postive for Ghost. The most famous is the Ghostie- award winning "Melting Pot of Alcohol" by DJ Alex S.

DarkRazorZ created a Facebook fanpage known as the "Melting Pot of Friendship ". It is one of the websites where he links to his newly uploaded videos of Ghost, and where trolls talk about the show and its lore.

As well as the aforementioned splices and remixes, the phrase has been thrown around by celebrities, particularly those who represent the opposite of Ghost's ideals.

Retrieved from "https://truecapitalist.miraheze.org/w/index.php?title=Melting_Pot_of_Friendship&oldid=16794"
Categories:
Cookies help us deliver our services. By using our services, you agree to our use of cookies.