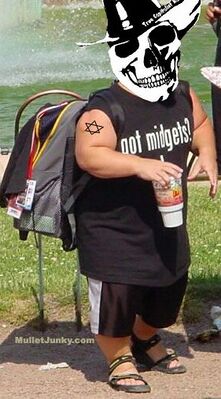 Midget Ghost is one of Ghost's many fan-given alter egos given to him by trolls of his radio broadcast, a version of himself as a midget.

Ghost first mentioned midgets on May 9th, 2011 after he thought that an underage caller sounded like a midget. After this, he discussed how he thought being a midget has to be a punishment from God, though he stated at the end that he was only kidding. This obviously lead to people calling Ghost a midget, which became a fairly popular method of trolling in the late 2011 and early 2012 era of True Capitalist Radio.

Midget Ghost became popular once again around May 2016 after Ghost facetiously claimed that he was a midget. This soon caught on and before long, trolls began to joke about Ghost being a midget, making splices and remixes featuring quotes and other midget-related content were made, often being featured several times a show during Radio Graffiti.

This troll and fan-given alter ego is similar to Crippled Ghost. People have also joked about Ghost being bald or having dentures.

Ghost has stated that he doesn't 'even like midgets that much' and that they 'scare him', though he quickly retracted this comment, mentioning that there was a midget bartender on Sixth Street that he liked.

Retrieved from "https://truecapitalist.miraheze.org/w/index.php?title=Midget_Ghost&oldid=11825"
Categories:
Cookies help us deliver our services. By using our services, you agree to our use of cookies.