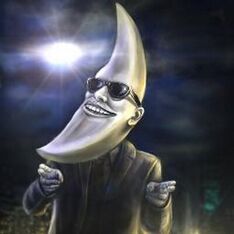 Moon Man is a reinterpretation of the short-lived McDonald's mascot from the 80's, Mac Tonight, whom the Internet twisted into a racist musician that sang various racist tunes, which were usually reinterpretations of various gangsta rap songs. Moon Man began his current career as a white supremacist when he was discovered in late 2007 by YTMND. Moon Man quickly gained popularity after the 4chan sub-board /pol/ discovered him in 2015, where his racist and misogynist views quickly resonated with the board's far-right wing user base. Moon Man's voice is the AT&T US Mike Text-to-Speech sdk. Both Moon Man and the Mike voice itself have been used time and time again for hundreds of calls since the birth of Radio Graffiti.

While his existing racial songs are often spammed on the segment, there have been times when people called in as Moon Man to deliver a message to Ghost and then chant "K-K-K" repeatedly until Ghost hung up on him, and some other times brand new songs were written to hurl insults at Ghost or certain other trolls. One of these songs, which was played on Episode 399, was meant to bash bronies, but Ghost misinterpreted it as Moon Man saying that he was a brony. AT&T US Mike is also used in place of an actual announcer for parody versions of the TCR intro, which often led to them sounding cheaply rehashed. After Ghost discovered who Moon Man actually is, he talked about how stupid he thought the meme was and wondered where the trolls had manged to find the character, whom he still remembered as an old McDonald's mascot from 1986.

Some splices have used Moon Man in them. During Episode 275, someone played a splice of Moon Man putting MaskedPony in a gas chamber, which arose dissatisfaction from both the real MaskedPony and another troll calling in as Moon Man, with the latter saying that he was impersonated. The first Radio Graffiti call in Episode 394 was of Ghost and Moon Man killing blacks, resulting in cans.wav.

Moonman's counterpart, Sunman, made two TTS donations during The Ghost Show Episode 13, with Ghost at first mistaking him for being serious, and later getting trolled with his black supremacy rhetoric.

Retrieved from "https://truecapitalist.miraheze.org/w/index.php?title=Moon_Man&oldid=14882"
Categories:
Cookies help us deliver our services. By using our services, you agree to our use of cookies.