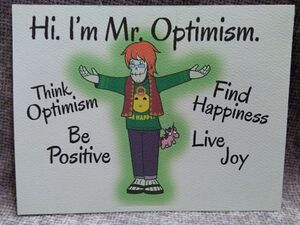 When in this character, Ghost covers news stories in an overtly idealistic way, with a fruity voice. He reads stories of tragedies and pretends to see the "good side" of them. For example, he attempts to explain the reason why the trolls call up his show and forgives them for it, claiming that it is not their fault that they were raised that way. A much darker side of Mr. Optimism is his support for internet censorship. In one episode, he fully embraced the idea of censoring the internet and turning it into an optimistic safe space devoid of all criticism and harsh language.

Ghost played Mr. Optimism two times during 2012 and the character has made occasional appearances after The Return: