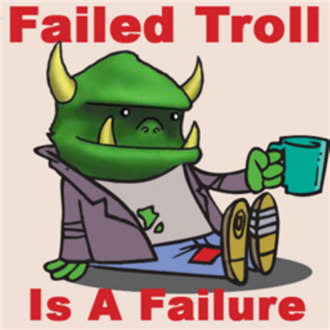 Newfag is an "X-fag" term that was originally created by users of 4chan as a joke to mock homophobia involving calling homosexuals and/or other people "fags" as an insult, which, along with other such terms, were (jokingly) used by users to describe themselves.  It, however, eventually became a general internet version of "noob" through a misunderstanding of it, along with other terms similar to it.

In the case of True Capitalist Radio, a newfag refers to someone who is (either) new to Ghost's show and/or is inexperienced with trolling him. Do note, though, that not all new trolls are considered newfags (for example, EquestrianCitizen978 and Coodoo17 in the 2011-12 run; Benito Ghostini and Germit the Gay Frog for the 2016-present run).

These callers commonly make vapid threats, are incomprehensible, or attempt to pass themselves off as well known trolls on the broadcast due to a lack of personality and (more often than not) testicular fortitude. They often make splices that are generally considered to be of low quality for their first attempts and often get themselves embarrassed and hung up on immediately. A large percentage of Radio Graffiti calls are generally filled up with failtrolls, and as a result attract the irk of older listeners.

During the 2011-2012 era, Ghost sometimes played the Game Over sound from Super Mario Bros. or the signature laugh of Nelson Muntz from The Simpsons whenever a failtroll called in.

The majority of newfags came across True Capitalist Radio through the popular YouTube uploads of DarkRazorZ, whose videos were trimmed of what he considered failed attempts, as opposed to Elfoxoloco, who uploads the entire Radio Graffiti of that days' show (though as of 2016, he has followed DarkRazorZ in suit to stop including fail calls). Those uploads were sometimes three times longer than DRZ's uploads. Newfags thus get the idea that the show is easily exploitable for their unfunny memes or bad jokes, and call in expecting a reaction from Ghost deserved of, say, a Tub Guy call. Naturally, this is rarely the case, and Ghost himself is usually more annoyed at the failure of an attempted troll call than the fact that the individual tried to irritate him.

Influxes of such people occur following major events - such as Troll War III, or the June 2011 uploads - in the show's career. Ghost does not take kindly to seeing many new numbers on his switchboard after leaving the show for a week and often either never calls on them or hangs up promptly once they begin either speaking in audio stutters or give a lot of feedback, regardless if they are "serious callers" or not. He believes these people use Windows 3.1 computers with 32 megabytes of RAM and a 386SX, causing their calls to short out, or their "Network connection can't lift the voice packets up to the server".

These particular newfags called in for such a long period of time that Ghost caught up with their acts, and knew them by their voice and number. For the most part, they did not meet happy ends as far as their status in the community goes.

A neo-nazi from South Australia, presumably in his 40s, who constantly peddles neo-nazi propaganda in his donations. He has become notorious for interrupting Radio Graffiti with his video donations, much to everyone's disgust, as well for his racist slurs.

A nine year-old kid who usually posted in the forum, much to the annoyance of other users, which led to other trolls to make fun of Cicinwad and forced him to leave ghost.report and The Ghost Show.

A failtroll from Ghost's Forum who posted cringey/disgusting image posts, only saying "bock" which led to him being banned, but he was back on forums twice with two new accounts. After the forums were shut down, he tried to join TGS Discord server, but was quickly banned by the owner, Pro. Raptor

A teenager with a strong southern drawl who claimed to call out of Saginaw, Michigan (despite the area code for that city being 989) and use derogatory comments and racial stereotypes and slurs against Ghost. He predated the June 2011 raids, yet Ghost got sick and tired of him quickly, especially when he created the Robert Chomsky rumor in September 2011. Ghost took his number down and gave his house a ring-up on the Christmas Eve broadcast, in which his mother answered and embarrassed him by having no knowledge of her son's activities on the internet. He called up an hour later in a high amount of anger, to which Ghost claimed victory and threatened him to never call the show again.

Despite that threat, he called two more times: Sometime during early January 2012, "apologizing" to Ghost. His last call was in April 2012, chanting Ron Paul's name. He was strongly anti-Semitic, and his voice irritated both the show host and listeners. He can be heard in DarkRazorZ's famous June 17, 2011 upload. Despite his generally irritating and endless calls to attempt to annoy Ghost, he can be credited with helping to the creation of some of the most infamous splices and remixes on the show, due to Ghost's varying responses to him. He did not return when Ghost came back in 2016.

On The Ghost Show Episode 84, Ghost suspected his return after dealing with a spammer in his live chatroom. The spammer would call up for Radio Graffiti and denied that he was the same guy.

An 8 to 12-year-old girl who called the show numerous times in February 2012, using a meme from Death Note. She occasionally had a brother or sister on the line with her. She was doxed at the end of February by members of the Capitalist Army, after numerous complaints from listeners about her (especially when she got involved in a cluster call a day prior). A sound-alike called in sometime in 2016, using the same tactics and got her number posted for wasting Ghost's time.

A troll who converged and worked with IbanEzzo to troll Ghost. He started calling in September 2011, and was disliked by many because of his voice and failure at ever getting Ghost annoyed. He was doxed on February 2012, along with Iban and his father's picture was used as Ghost's Twitter avatar for a period of time in March. Both had been irritating Ghost for a long time and he became sick of them calling together and trying to dox him.

In late 2011, there was a caller, described by Ghost as a 'boy, [...] girl, or eunuch' that consistently called into the broadcast, mostly during Radio Graffiti, singing homosexual-related songs to agitate Ghost. Ghost cited that "[his show] isn't American Idol, Dick Clark isn't going to sign you for a record deal" and revealed his hatred for such songs like "Sex and Candy" from Marcy Playground. He called very frequently in the fall, and disappeared shortly after December of that year.

A person from the Surgeradio.org network radio network in California, who called into Ghost's show during 2011, simply stating his website name. Ghost's typical response would be to "DDoS [him and get] him off the line!" Nevertheless, Ghosts calls to invasion never came through, and he continued to call in at random intervals, until he was given the 'Worst Fail Troll' award at the 2011 Ghosties, eventually prompting him to leave Ghost alone. As of late 2016, he (or someone impersonating him) has come back, once again calling up regularly, and saying his usual line.

A teenager who used to call from 661 area code (not to be confused with Surgeradio.org Guy above) and who claimed that he was behind Cleveland Show Calls that kept plaguing the show during this era. He called Ghost during Capitalist Episode 433 with a Pizzagate joke saying he was waiting for "washed up radio host with a Haitian pizza by the wheelchair ramp". Ghost became furious and dropped his usual Radio Graffiti acting to start questioning the caller if he thought pedophilia is funny. The caller tried to avoid answering Ghost's questions despite Ghost's threats that he was going to give out his number out if he wasn't going to answer to him. Ultimately, Ghost gave out his number on the air and Rage Quit the show because he was so pissed off with the caller. After the show, he went to Tub Guy's Tinychat room claiming that he was behind the Cleveland Show Calls, stating that he found pizza jokes really funny and that he will continue to call into the show despite several threats to dox him.

As he had promised, he returned in Capitalist Episode 434 with another pizza joke. This time around, Ghost questioned him about why his address was on a sexual predator list and he once again tried to avoid Ghost's questions. Trolls also lived up to their promises and doxed him in the next broadcast, even though the caller himself didn't seem to care that much. One call during the said episode seemed to be a reading of an apology letter from the 661 caller, but it was cut off at the last moment.

Retrieved from "https://truecapitalist.miraheze.org/w/index.php?title=Newfags&oldid=19663"
Categories:
Cookies help us deliver our services. By using our services, you agree to our use of cookies.