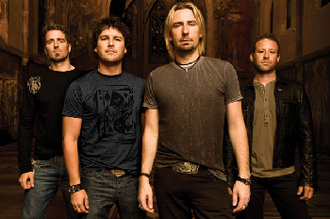 Nickelback is a Canadian rock band formed in 1995 in Hanna, Alberta, Canada. The band is composed of guitarist and lead vocalist Chad Kroeger, guitarist, keyboardist and backing vocalist Ryan Peake, bassist Mike Kroeger, and drummer Daniel Adair. Ghost is known to hate the band for its fruitiness and frequently refers to it as "Broke back, broke dick Nickelback".

In August 2016, Ghost's hatred of Nickelback led to the proliferation of remixes of the song "Photograph" during Radio Graffiti. Ghost has been particularly disturbed by remixes using songs he likes (especially from Stevie Ray Vaughan, who he considers the "greatest guitarist to ever live") or those that he has played on the broadcast, such as "Money, Success, Fame, Glamour". Ghost managed to correctly guess in Episode 334 that the Nickelback song everyone was playing was the new "Rickroll". Other Nickelback remixes have included:

Retrieved from "https://truecapitalist.miraheze.org/w/index.php?title=Nickelback&oldid=12148"
Categories:
Cookies help us deliver our services. By using our services, you agree to our use of cookies.