Ghost: I thought you Russians didn't celebrate Christmas, for Christ's sake, you atheist vodka-drinking pricks!
Nikolai: Well, you know, it's all about presents and stuff. But yes, I'm atheist. Don't celebrate it at length, like Christians do, you know? But we do. We drink vodka, eat borscht and go shoot things, you know, in woods, with AK-47s. 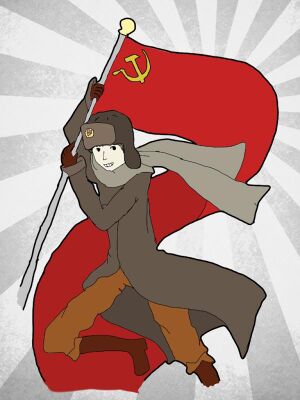 Nikolai was a Russian caller who frequently calls up Ghost during True Capitalist Radio. Nikolai was described as a stereotypical Russian, drinking excessive amounts of vodka, having cocked eyes, and breathing with his mouth open. He sometimes praised Vladimir Lenin or Vladimir Putin whenever he called, adding to Ghost's dislike of Nikolai.

Whenever he calls up, Ghost ends up raging almost instantly at the mention of "It's me, Nikolai!" due to his dislike for Russians, who, during the "Soviet Era," were communists and not capitalists. He has called up responding to news topics or bragging about selling arms to terrorist forces (once stating, for example, that he was "auctioning off a missile"), enraging Ghost even further. Eventually, Ghost got so annoyed by Nikolai that he decided to stop taking his calls altogether and cut the call short whenever hearing his voice. His last call was on Episode 198.

While opinions of him were split among TCR listeners, Ghost never took kindly to the fact that a commie with fans was on his show. Evidently Nikolai was never a particularly popular troll, given that he won the dubious "Worst TCR Character" award at the 2011 Ghosties.

While he has not called when Ghost came back in 2016, there have been a handful of Nikolai impersonators who called in to the show.

Ghost mentioned Nikolai during The Ghost Show Episode 3 after a newfag tried to imitate him on the show and wondered if the KGB had captured him and forced him to become a colon smuggler for them.

Retrieved from "https://truecapitalist.miraheze.org/w/index.php?title=Nikolai&oldid=14353"
Categories:
Cookies help us deliver our services. By using our services, you agree to our use of cookies.