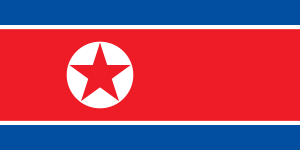 “This man has not stopped eating. I mean, have you seen the chin on this son of a bitch?”

—Ghost, on the Supreme Leader of North Korea, Kim Jong-un, in episode 261

The Democratic People's Republic of Korea (DPRK), commonly referred to as "North Korea", is a country in East Asia, occupying the northern half of the Korean Peninsula. Its capital and largest city is Pyongyang. North Korea shares borders with China and Russia. North Korea is most widely known for its extreme secrecy, and totalitarian dictatorship.

Since it is a single-party state, its political system can be described as a 'herditary dictatorship'. When the country's founder Kim Il-sung died in 1994, he recieved the title of Eternal President, handing the role of Supreme leader to Kim Jong-il. During this time the country was ridiculed by Ghost on the True Conservative and Capitalist broadcasts.

When Kim Jong-il died in December 2011, Ghost celebrated enthusiastically, saying..."I'm glad you're dead, you know?", and hoped North Korea would 'raise up'. The new Leader, Kim Jong-un, described by Ghost as a 'fat hambone', seemed uneasy in his new position, giving false hope that the country could throw off oppression. To this day, Ghost remains hopeful that North Korea will one day turn to capitalism.

With recent reheating of tension in the region, especially as of 2017, North Korea has been a frequent topic of shows.

Retrieved from "https://truecapitalist.miraheze.org/w/index.php?title=North_Korea&oldid=14848"
Categories:
Cookies help us deliver our services. By using our services, you agree to our use of cookies.