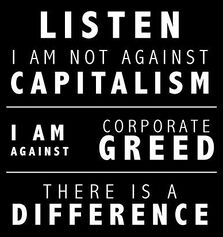 Occupy Wall Street (also known as OWS) was a protest movement that that began on September 17, 2011 in Zuccotti Park, New York. The protesters claim to be against social and economic inequality, high unemployment, greed, as well as corruption, The protesters' slogan, "We are the 99%" refers to the growing inequality (in terms of wealth) in the U.S.A. between the wealthiest 1% and the rest of the population. The protests in New York City have sparked related Occupy protests and movements around the world.

Occupy Wall Street has been a massive topic for Ghost on the True Capitalist Radio broadcast, who claims the protesters are hypocrites; one of the issues they protest is high unemployment, while they are technically unemployed, sitting out and doing nothing. Ghost also claims to hold an unbiased point of view towards OWS, as he pointed out that, "...they had a good foundation, and a strong standing point, but when asked what the hell it was that they really wanted, no one said a word. And that, is Junkyard America, ladies and gentlemen."

Ghost calls the protesters "worthless vagabond losers" and "stupid ridiculous bum idiots" who have nothing better to do than sit around listening to "Rage Against the Machine". Ghost has been highly critical of their pooping in the streets and their killing the grass in the parks. Ghost has criticized Anonymous and other organizations for participating in organizing the protests. Ghost has also claimed that they are stopping people from getting to work, slowing traffic on the sidewalks and streets.

Ghost has also been critical of their upper-middle class white majority. Ghost argued that because they all have iPods and iPhones and laptop computers, that they really aren't that poor. He also suggested that there may be a racial motive to it all, reporting on an article that claimed the lowest, most poverty stricken classes were nearly absent from the protests.

Ghost's respect for Herman Cain was gained after he discovered Cain was against OWS.

Even after the movement came to a halt, Ghost always took some special time in his future broadcasts to mention what the leftover OWS administrators and protesters were doing. Someone claiming to be Ghost mocked them on Twitter in late 2012 when they 'celebrated' the anniversary since their movement began.

Using OWS as a method of trolling was very popular at the time. No major splices or remixes have been produced; Twitter/Chatroom names have been the main outlet. Some names include:

Retrieved from "https://truecapitalist.miraheze.org/w/index.php?title=Occupy_Wall_Street&oldid=11171"
Categories:
Cookies help us deliver our services. By using our services, you agree to our use of cookies.