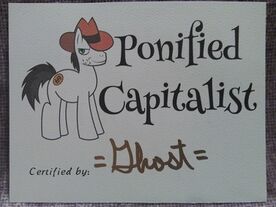 There are many variations of Ghost in pony form. This is the official version of Ghost The Pony as seen in the autograph that was up up for sale on Capitalist Episode 407.

If there's something that makes Ghost rage, whether it be a TV show, video game, movie, political ideology, or some kind of internet phenomena, there's probably an alter-ego for that.

Ghost alter-egos and "other forms" are created by fans and trolls alike and are often posted on image boards and YouTube videos related to TCR topics and BTR raids.

This is a page containing information about the less popular and fairly new egos. You may only add an ego if it has a following among TCR listeners.

Due to the hatred Ghost has of the Brony (and Pegasister) community, it became popular for trolls and bronies to put Ghost "in pony form". Putting him in pony form is often done by creating an unofficial pony OC (or ponysona), by using tools such as GeneralZoi's Pony Creator or by placing a sound clip of his voice in a scene from the show to make one of the characters sound like him.

There are many variations of this form, but the most popular is a slightly chubby Earth Pony colt with a white coat and a messy brown mane and tail. His cutie mark is often a Melting Pot of Friendship or his former "Texas Skeleton" avatar. His special talent is often assumed to be speaking and/or making money. Much like members of the Apple family, he wears nothing but a cowboy hat. This design was made "official" by Ghost in late 2016 when he began selling the "Ponified Capitalist" autographs. Ghost was informed in Capitalist Episode 559 through a shoutout name that there's porn of him as a pony, causing him to be greatly enraged.

When placed in the show, Ghost often takes the form of Rarity due to the popular MLP parody series PONY.MOV, which portrayed her as a racist who forced Mexicans to make dresses in a sweat shop.

It's a well known fact that Ghost a is hard-core Capitalist. It's also a well known fact that trolls will often spread "slanderous lies" against him that make him look or sound like a bed-wetting Libbie supporter of Communism, Socialism, Marxism, or any other far-leftist ideologies. There are a small number of images of Ghost the Commie in existence. However, there are many splices where Ghost announces his support of the Communist Party and other Communist countries. It is also common to find "false statements" about him being a Socialist on forums, image boards, blogs, and wikis.

Despite the "Inspector Ghost" troll falling out of favor when Ghost resumed hosting in 2016, there was a brief resurfacing of the trend with the Twitter name "Go Go Gadget Napalm."

Roger Stone is a conservative political strategist and author of several books, including Jeb! And the Bush Crime Family, whose title Ghost has referenced several times. Starting in early April 2016, some trolls began calling Ghost "Roger Stone", similar to other trolls calling him "Big Jack" and "John Conquest". Shortly after this began, Ghost expressed frustration at being identified as Stone, but claimed to be an acquaintance of the real Stone, and praised him for being a fellow Donald Trump supporter. This ego very quickly fell out of popularity as trolls began to move on to Bureaucratic Ghost trolls and other identities.

In late summer 2016, another dox began to circulate concerning an Austin man named Thomas Albin who was rumored to be Ghost. Supporting details for this identification included a page posted by Albin's wife, a kindergarten teacher, mentioning that the couple had a dog named Templeton, Albin's approximate age, and his job as a financial analyst. Many fans of TCR pointed out the holes in this claim, as Albin lacks Ghost's supposed business holdings and various other details were inconsistent with what is known about Ghost.

Some trolls nonetheless began calling Ghost "Thomas Albin" in Fall 2016, at first mostly on Twitter. After the death of the real John Conquest, however, it became a popular replacement as Ghost's alleged real name, frequently used in Twitter names and a few rare Radio Graffiti calls. In Episode 421, Ghost "admitted" to being Thomas Albin as a joke, but ended up getting called Thomas Albin by trolls, and also got hit with a splice of him as Albin getting shot.

Upon Ghost's return from the Break, Albin names became more common, with Ghost usually reacting to them by cans.waving and shouting, "I know what you mean by that!" Such names include: 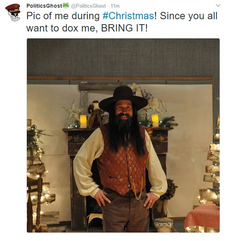 A supposed image of Ghost in real life, later revealed as a man named Keith Redford.

On Saturday Night Show Episode 42, a video of another supposed dox was donated to Ghost. The video featured the same man from Ghost's "Pic of me during #Christmas" tweet. This man was later revealed as Keith Redford, an impersonator of the historical figure Porter Rockwell. Ghost was furious about the video, claiming "it was supposed to be unlisted."

Afterwards, the original image from Ghost's tweet was found on Keith's private Facebook. This led many to believe that Ghost either knew Keith personally, or was Keith himself.

Trolls quickly began calling Ghost "Keith Redford" in TTS donations and editing his face onto stickers in the DLive chat. These caused massive rage and cans.wav from Ghost, who yelled for people to "stop trying to dox him."

Some callers have made the insult/assumption that Ghost was bald, but in November 2017, upon the end of The Break, many trolls began making Gab names suggesting that Ghost was bald. Starting off slow, this eventually involved into a consistent troll, with many names, calls and splices being made about it throughout November and December of that year, causing massive rage from Ghost. Some trolls even suggested using methods to get his hair back, leading to some fake advertisements being made, most notably a video by Twilie Atkins that was gabbed at Ghost and played on the air.

Another more minor ego that went hand-in-hand with this troll was the suggestion that Ghost didn't have all his teeth, or that he had dentures. This led to a trend of Gab names and a handful of splices about Ghost having dentures. Both the bald and denture trolls stopped sometime in January 2018. When Ghost returned to do The Ghost Show nearly a year later, both of these trolls returned in full force via donation names referring to Ghost being bald or having no teeth. In one case, he had ads on his computer referring to both trolling material, in which he blamed it on Meme Magic.

Retrieved from "https://truecapitalist.miraheze.org/w/index.php?title=Other_Fan-Given_Alter_Egos&oldid=19801"
Category:
Cookies help us deliver our services. By using our services, you agree to our use of cookies.