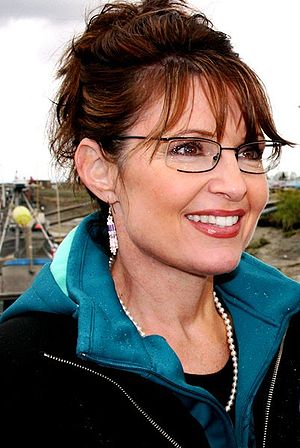 —A splice of Ghost, announcing his support of Sarah Palin

Sarah Palin, otherwise known as Sarah 'Eskimo Bimbo' Palin is an American conservative politician. She served as governor of Alaska. Ghost, the host of True Capitalist Radio, cites her as one of his reasons for leaving the conservative movement and for ending the True Conservative Radio broadcast.

Ghost cites her family as a wreck and a prime example of Junkyard America. Sarah Palin's 17 year old daughter became pregnant in 2008, which made Ghost label her as a hypocrite, and her son was born with Down's syndrome.

Ghost has occasionally done voice impressions of Todd Palin, her husband. On the 86th episode of True Capitalist Radio, Todd Palin allegedly called into the broadcast (starting at 56:50).

Splices of Ghost saying favorable things for Sarah Palin has been an occasional but successful troll.

Since The Return, Sarah Palin was once again mentioned when a twitter name encouraged Trump to pick her as his VP. This made Ghost start screaming "TRUMP, IF YOU'RE LISTENING, PLEASE DON'T PICK SARAH PALIN, PLEASE!"

Retrieved from "https://truecapitalist.miraheze.org/w/index.php?title=Sarah_Palin&oldid=14217"
Categories:
Cookies help us deliver our services. By using our services, you agree to our use of cookies.