“The sun is warm, the grass is green... and what the hell is that STUPID PANDA-*cans.wav*"” 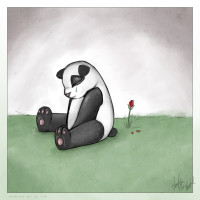 The Panda hadn't been a popular target for trolls, with the exception of occasional trolling attempts and material, such as a panda remix by SharpSplicer, which Ghost actually liked. On Episode 393, Ghost encountered the Panda again. Someone else tweeted Ghost a picture of a panda, which pissed him off even more, and he cans.wav'd over a female Pandaren cosplay when he "saw" the panda again.

On Episode 463, the Panda started to get more recognition among trolls, thanks to people tweeting pictures of the Panda on Twitter to Ghost. On International Panda Day, trolls posted pictures of pandas, and on that episode's Radio Graffiti, Ghost was trolled by J-Man Capitalist playing a splice involving him and the panda from the "Never Say No to Panda" commercials.

Retrieved from "https://truecapitalist.miraheze.org/w/index.php?title=Panda&oldid=14150"
Categories:
Cookies help us deliver our services. By using our services, you agree to our use of cookies.