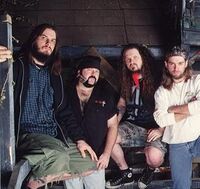 Pantera was a heavy metal band that was formed in 1981. They were from the Arlington, Texas. Their band members included Dimebag Darrell, Phil Anselmo, Vinnie Brown, Rex Brown and Terry Glaze. Ghost has repeatedly praised the band and their songs, claiming that they were real metal. He has stated on several occassions that "metal died with Dimebag Darrell."

As a result of Ghost liking Pantera, there have been many trolls related to the band. These include: shoutout names making fun of Dimebag Darrell's death, Vinnie Paul's death, insulting the band in general, etc. Another common trolling tactic during The Ghost Show is in the DLive Chatroom when someone donates $20.20 to Ghost for the sole purpose of pissing him off with a music video of a band or musician he doesn't like. Trolls start saying they're better than Pantera.

Some donations have included work Pantera made during their glam metal days in the 80s before their signature groove metal sound which angers Ghost to some degree. Ghost was even more shocked to figure out that Phil Anselmo was a part of the glam metal stick on their Power Metal album.

Retrieved from "https://truecapitalist.miraheze.org/w/index.php?title=Pantera&oldid=18921"
Categories:
Cookies help us deliver our services. By using our services, you agree to our use of cookies.