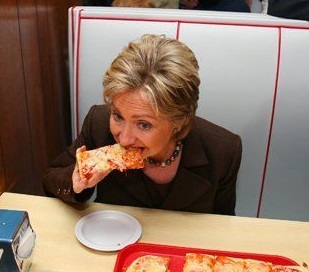 Pizzagate is one of the most notably controversial news subjects and alleged Conspiracy Theories to be featured in True Capitalist Radio since Ghost's return in 2016. The conspiracy accuses several notable members of Democratic Party and GOP, as well as the staff of the Comet Ping Pong pizzeria in Washington D.C., of being involved in a child trafficking ring as well as practicing of Satanism and pedophilia.

The conspiracy has frequently been labeled as false by many skeptics, likely because of the large amount of confirmation bias it relies on, as well as the sketchy nature of most of the evidence relating to the case.

Ever since Ghost first mentioned it during Episode 387, Pizzagate has been a frequent subject matter during True Capitalist Radio broadcasts. 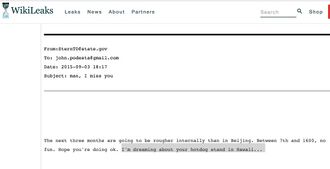 One of the strange messages found in the Podesta E-mail leak.

The conspiracy was originally sparked by a series of e-mail leaks from Hillary Clinton as well as John Podesta, the Chair and Counselor of the Center for American Progress (CAP), a liberal think tank in Washington, D.C. in early November. These e-mails contained odd messages which some people considered to be coded language (such as the handkerchief code), similar to how drug dealers refer to various substances and quantities using code words. Some of the key words that frequently appeared in the e-mails were: hot dog, pizza, cheese, pasta, and dominoes.

Theories started to quickly develop that Comet Ping Pong Pizzeria was somehow connected to the case after a series of strange images were found from the social media feed of Comet Ping Pong owner, James Alefantis. Alefantis was also the gay lover of Media Matters founder David Brock, who was quickly brought into this case through this link.

Ghost first mentioned the controversy in Episode 387 before it was called Pizzagate and went on extensively about how he believed the conspiracy was related to the disappearance of Johnny Gosch. Ghost explained how he believed that the Gosch case was part of an elaborate government operation dedicated to kidnapping children so that the bureaucrats could use them for their own sexual practices and how the government was trying to hide just how common child kidnappings are in the United States.

TrumpinCapitalist has also been conducting his own research on the subject matter, relating to a series of alleged emergency tunnels going under Washington D.C. similar to Metro-2 in Moscow, that possibly connect to Comet Ping Pong building underground.

On the other hand, calls relating to Pizzagate have been much less successful. Because of the sincerity of his views on Pizzagate, Ghost has become extremely vigilant against various splices and calls relating to pedophilia. After Captain Howdy's splice which portrayed Ghost as a pedophile was played on the show, Ghost quickly cut off the caller, and warned trolls that he wasn't going to allow humor related to pedophilia on his show. After another caller tried to play the same splice, Ghost cut him off and lived up to his promises by offering a free autograph for anyone who doxed Captain Howdy. This incident forced Howdy to change his name to WolfgangZ and swiftly ended any pedophilia-related splices in TCR for a while.

On Episode 433, a failtroll called in during Radio Graffiti and made a Haitian Pizza joke. This caused Ghost to rage almost as hard as his True Conservative Radio days. After the caller infuriated Ghost further by refusing to answer his question of if he thought that child pornography was something to make fun of, Ghost gave out his number and rage quitted. He would later apologize for how he acted on Twitter. The caller returned on the next broadcast during Radio Graffiti, and Ghost brought up the fact that the caller's address was on a sexual predator list and asked why it is. The caller refused to answer again, and Ghost just hung up on him and continued on with the broadcast. After the broadcast, the caller was doxed and his location was revealed to be in California. Although the caller didn't seem to care, he never called in again.

The following is a gallery dedicated to #Pizzagate. 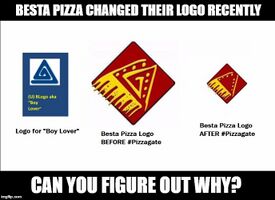 A coincidence? Not quite to some. 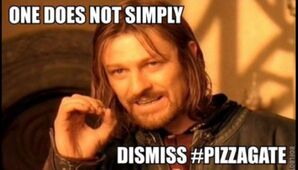 How some conspiracy theorists view Pizzagate.
Retrieved from "https://truecapitalist.miraheze.org/w/index.php?title=Pizzagate&oldid=12075"
Categories:
Cookies help us deliver our services. By using our services, you agree to our use of cookies.