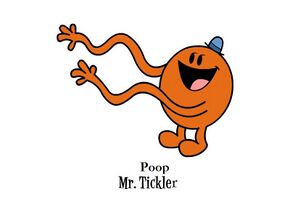 PoopTickler (also known by KinetiK001 on YouTube and by @PoopTickler on Twitter) is one of the original Ghost trolls. The name made a brief debut during an early 2010 True Conservative Radio broadcast, being mentioned on the air after coming to the defense of a homeless lottery player.

Beginning in August 2011, the PoopTickler family expanded rapidly, beginning with the Twitter name "PoopTicklerJr" and Ghost's reaction , "Oh, great, yeah, Poop Tickler Junior! It's bad enough that we got a Goddamn a PoopTickler, but now PoopTickler Junior! Jesus Christ!" Because of the hilarity, hundreds of more Twitter names were quickly made and many were Tweeted the next show. Since then it has expanded to be one of the largest name-groups in True Capitalist Radio history.

Some members of the family include:

Similar to Pooptickler, Slimegirls (and the occasional slimeboy) were a series of Twitter names intended to irritate Ghost. They were short lived, mostly through December 2011, and dissapeared soon after.

The GimpSquad was a series of Twitter accounts based off of topics regarding the show and Ghost, followed by a gimp ending. They infested his Twitter feeds in late 2011 and early 2012, and he was not amused at seeing nearly 25 accounts of the same ending per shoutout session. He often cancelled shoutouts when they flooded the list, since he could not see any actual fans amongst the dozens of Gimp accounts.

A single Twitter name, known as UrineCaresser, which appeared to be a rival of sorts to the Pooptickler family, made Ghost gag nearly every time he read it.

Retrieved from "https://truecapitalist.miraheze.org/w/index.php?title=PoopTickler&oldid=18633"
Categories:
Cookies help us deliver our services. By using our services, you agree to our use of cookies.