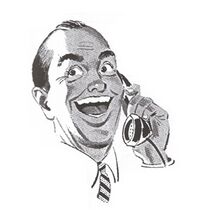 This article is about Prank Calls done by Ghost himself, and as a reciprocation against him. For an article on trolling Ghost, see Trolling Tactics.

Prank Calls are a joke done over the phone, usually towards the second party in a phone call. Ghost has been known to do prank calls to various parties.

Most of Ghost's prank calls are done on failtrolls who call and attempt to troll him (for example people who call up and say "Wanna fight, faggot?", or extremely racist propaganda, or who consistently fail multiple times in a show). Ghost makes a list of their phone numbers and on special occasions he prank calls them live on the True Capitalist Radio Broadcast.

Ghost's most famous prank call, which he has repeated on numerous occasions consists of him calling on the unsuspecting person and claiming to have "just been called by this number" and that someone threatened to kill his Grandmother. Another famous call was made to Caller 417, whose mother picked up the line on late Christmas Eve, effectively embarrassing the creator of 'Robert Chomsky', and causing him to stop calling afterwards.

In 2012, possibly because of Ghost's shenanigans on Christmas, the trolls had smartened up and began doing prank calls with his voice. With Amy Daly's help, who created a soundboard containing a large number of Ghost quotes, they began calling other radio shows on BlogTalkRadio, ranging from religious services, to enraged African-Americans. Ghost has not taken amusement from this, and reacted in extreme rage after hearing a call to Howard Stern, along with calls by well known troll Cipher11 to schools, and businesses. Spermy the Cat was known to call shows with the soundboard back in 2011, resulting in many angry show hosts calling in out of nowhere, annoying Ghost greatly.

Although it wasn't as common as a troll, when Ghost returned in 2016, he still got hit with prank calls using his voice, raging more as they went on. For example, a caller from area code 510 (which serves Oakland, California and nearby areas, used clips from Mr. Fortune Cookie to an Asian man during a prank call, and got Ghost pissed off at trolls. By this point, people stopped making prank calls with Ghost's voice.

A notable prank pulled on Ghost occurred during Episode 417. Feeling in the Christmas spirit, Ghost attempted to call various prostitutes to try and convince them to quit their jobs, but was unsuccessful. One troll on Twitter then gave Ghost the number to the 'Ooh La La Bar'. After Ghost called the place, he found out that it was the number to Trump Tower, causing him to rage incredibly hard, break down crying, and almost rage quit. He still continued on anyways, despite Radio Graffiti being delayed due to his extended rage.

A couple months after he returned from The Break, on Episode 520's segment of Radio Graffiti, Twilie Atkins called the White House with a splice of Ghost being anti-Trump. This prank call in particular induced massive rage, and also caused Ghost to go on yet another rant on autists.

Retrieved from "https://truecapitalist.miraheze.org/w/index.php?title=Prank_Calls&oldid=13796"
Category:
Cookies help us deliver our services. By using our services, you agree to our use of cookies.