Pro. Raptor (formerly Raptorade76) is a The Ghost Show-era minor troll that joined early October who posted fanart on the ghost.report forums and later in November, Raptor started to troll with former community member AllFurriesAreManchildren (a.k.a. AFAM) to get rid of autists, newfags, bronies, etc.

His first appearance was on The Ghost Show Episode 106 and he posted his first artwork to Ghost also known as "Ghost's Autistic Reich". 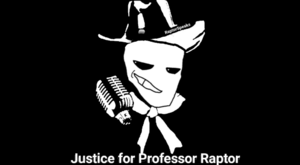 A list of individuals that Raptor has had to deal with:

Retrieved from "https://truecapitalist.miraheze.org/w/index.php?title=Pro._Raptor&oldid=19994"
Category:
Cookies help us deliver our services. By using our services, you agree to our use of cookies.