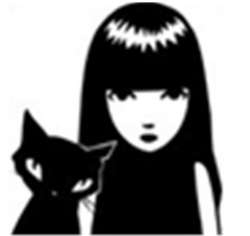 Psychic Kay, or Kay Gallagher, was a host on BlogTalkRadio, doing shows late at night giving psychic readings to callers. She was known for consistently yelling, giving senseless advice (even telling some callers to seriously consider killing themselves), and irritating many listeners and fellow hosts with her radical opinions and failure to even have conversations with callers without screaming, leading to a series of raids in a similar fashion to those done against True Capitalist Radio's Ghost to get her off the show, and eventually the internet. Initially they were spontaneous, but following Ghost's demise and four-year break, she became the target of the remaining members of Ghost's fanbase, including the Capitalist Army, who grouped together to troll her left and right, and force her to quit her show.

Kay became a new psuedo-Radio Graffiti for the remainder of the True Capitalist Radio listeners throughout Summer 2012, until she quit her show out of annoyance in early fall.

This pastebin explains the 'KGB' situation, and who Kay was.

A series of threads were posted on 4chan advertising the raids, citing that new grounds were needed for trolling since Ghost had left his show. Kay was the perfect target, as she was already disliked by many other hosts (for her rambling, and apparent hag-like insanity), and had been being harassed by a few trolls for a couple of months already. She was delusional about callers initially, believing them to be serious and needing advice, making it easy to get on the air to annoy her (however she rarely gave second chances, and just hung up on people who called back). Multiple memes (many deriving from Ghost's own show) were utilized against her, and throughout June, July, and August 2012, each of her shows were bombarded by sexually explicit callers, audio files, and set-ups. Some members of the BWC took it even further, releasing a dox of her home address, leading to pizzas being sent in mass numbers, and eventually getting her into a lot of trouble with the authorities.

My Little Pony, Ghost Soundboards, the Indiana Jones theme, and U.S. President Richard Nixon's "I am not a crook" speech were often utilized to troll her. Famous trolls from Ghost's show often called in as well, Ghetto Capitalist took the role of 'Jacob', who often made sexual advances towards Kay, PonyToast assumed the identity of "Earnest the Jew", who harassed her with questions from multiple Skype accounts on increasing his penis size, and the Tub Guy called in a few times as well attempting to have a friendly conversation. Even the Internet Buttstalker made a few unexpected appearences (since he is a member of the BWC) in July.

Caller Geno Blast, a veteran member of the Capitalist Army, was the ringleader of the trolling, and uploaded most of the raids to his YouTube channel (A few have been taken down by spammers, not all episodes survive unfortuantely). He irritated Kay greatly anytime he appeared in her chatroom, forcing her to kick him out multiple times in a row, and also caused her to Rage Quit from a program, when he took over the Skype and mocked her.

Kay doesn't seem to know about Ghost much, even if she has been hit with audio clips of him from time to time, even getting into an arguement with someone using a soundboard of Ghost in one of her shows. A troll call to Ghost was once made on his own broadcast by Cypher11, where he played audio of himself trolling Kay using a Ghost soundboard saying, "I hope someone slices off your head, and menstruates down your neck." Ghost was extremely enraged at this, and demanded his own trolls to not call other broadcasts using his voice.

End of the program

Kay became very irritated at having pizzas sent to her house, angry calls from other BTR hosts, and wasting time on her broadcast. She retaliated in September, forcing callers off the line, and began cursing out and screaming at them. Eventually, she was driven off her show for the last time in October, and deleted her entire BlogTalkRadio account. She now claims on her Twitter account that she will only do private readings moving forward. She has a new site for paid readings that appears to be inactive.

Retrieved from "https://truecapitalist.miraheze.org/w/index.php?title=Psychic_Kay&oldid=14185"
Categories:
Cookies help us deliver our services. By using our services, you agree to our use of cookies.